Op-ed: Prominent Jewish leader says American president has gone above and beyond to defend Israel's rights

As President Obama visits Israel, American Jews should look back with appreciation at the way that he has stood up and defended Israel on the global stage.

US President
In hope, in faith
Eitan Haber
Op-ed: In open letter, Eitan Haber welcomes President Obama to Israel; thanks US for 'giving us life'
In hope, in faith
When the United Nations General Assembly granted the Palestinians non-member observer status in November 2012, President Obama and his administration stood up against the resolution and made a clear case explaining why it was detrimental to peace. US Ambassador to the United Nations Susan Rice made it very clear that "we will continue to oppose firmly any and all unilateral actions in international bodies or treaties that circumvent or prejudge the very outcomes that can only be negotiated, including Palestinian statehood."

In 2011, President Obama made it clear that any future Palestinian state must come from negotiations, not from resolutions. The President declared, "Peace will not come through statements and resolutions at the United Nations. If it were that easy, it would have been accomplished by now." The president has said multiple times that while he is dedicated to peace, any action at the United Nations will only complicate the matter, not solve it. Further, he has reiterated time and time again that any peace agreement must take into account Israel's security needs and cannot be imposed from the outside. 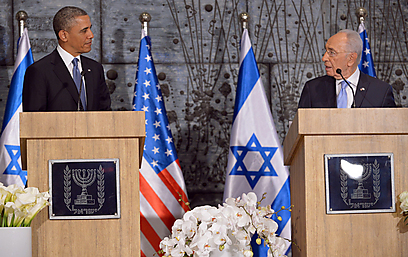 President Obama and his administration have not waivered in their support for Israel at the UN. In addition to having a 100% pro-Israel voting record at the UN - a first for an American president - the Obama Administration has stood up for Israel when critics were spewing hateful attacks against the Jewish state. The Obama Administration repeatedly boycotted the anti-Semitic Durban conference commemorations, opposed the anti-Israel Goldstone report, and supported Israel during the Gaza flotilla incident. In addition, President Obama has vocally opposed efforts to boycott, divest, or sanction Israel.

In addition to his efforts at the United Nations, President Obama made providing for Israel's security a top foreign policy priority. Upon taking office, he immediately helped restore Israel's qualitative military edge. And even as budgets have been shrinking in the United States, President Obama ensured that Israel received its full aid package, totaling $11.4 billion over four years - the largest amount in history. In addition, the president directed hundreds of millions of dollars in supplemental funding to help ensure the Iron Dome system became operational. The Iron Dome system saved countless Israeli lives during Operation Pillar of Defense and has been lauded for its revolutionary successes.

Because of his tremendous pro-Israel record, Israeli President Shimon Peres was expected to award President Obama with Israel's Medal of Distinction. According to President Peres, Obama will receive the medal for his "unique contribution to the security of the State of Israel, both through further strengthening the strategic cooperation between the countries and through the joint development of technology to defend against rockets and terrorism."

As he visits Israel, American Jews should be very proud of President Obama's strong record of support for the Jewish state and enjoy seeing our president affirm the unbreakable US-Israel bond that he has worked tirelessly to strengthen.

The author is the chairman of the National Jewish Democratic Council