Obama and Netanyahu at Israel Museum

At the beginning of the second day of United States President Barack Obama's visit to Israel, the American president toured the Israel Museum and viewed the Dead Sea Scrolls exhibition. He also viewed technological innovations and said Israeli high-tech was "inspiring."

Earlier Thursday, the rocket fire from the Gaza Strip was renewed as five rockets were launched from the northern Gaza strip toward the city of Sderot in southern Israel.

Only two of the rockets landed on Israeli territory. One exploded in a yard in Sderot, causing some property damage, while the other landed in an open terrain in the Shaar Negev Regional Council. From the Dead Sea Scrolls exhibition Obama continued to a special technological exhibition, where he examined several Israeli high-tech developments in the fields of alternative energy, traffic accidents, medicine, search and rescue and robotics. 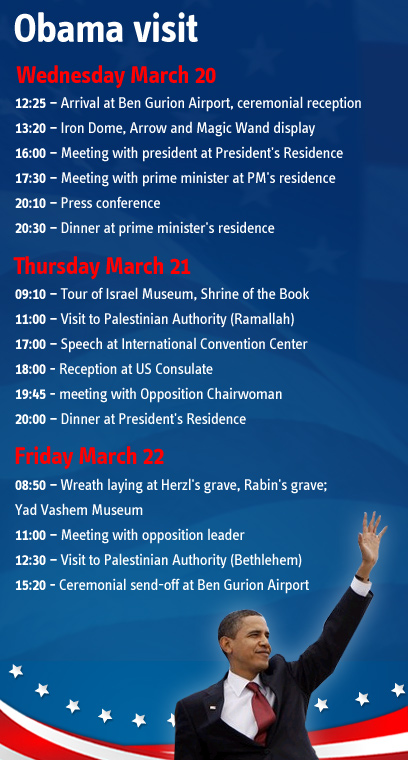 Among the developments was a system which alerts the driver to dangerous road conditions, a motorized exoskeleton which enables paralyzed people to walk and sit, a "mind control" helmet which enables using a computer without manual operation and other achievements.

Obama said the exhibition is "inspiring," but remarking on a robot the shape of a snake, he added: "My wife really wouldn't like that."

The American president went on to taste a matza and was polite enough to say it was tasty.

Later, President Shimon Peres also arrived at the museum and cautioned Obama not to delay in Ramallah, as he is expected for dinner in Jerusalem.

Around 10:45 Obama is scheduled to fly to Ramallah in his Marine One helicopter, where he will meet Palestinian President Mahmoud Abbas in the Mukataa, the administrative center of the Palestinian Authority.

The two will have lunch, followed by a joint press conference.

Alexandra Luckash contributed to this report