The leader of Egypt's Coptic Orthodox Church on Tuesday blasted the country's Islamist president over his handling of recent deadly sectarian violence, including an attack on the main cathedral in Cairo.

The remarks by Pope Tawadros II underscore rising Muslim-Christian tensions in Egypt. They were his first direct criticism of President Mohamed Morsi since he was enthroned in November as the spiritual leader of Egypt's Orthodox Christians. They are also likely to fuel political turmoil that has been roiling the country since the ouster of autocrat Hosni Mubarak two years ago.

Egypt is already divided between two camps, with Morsi and Islamist allies in one and moderate Muslims, Christians and liberals in the other. The political schism is essentially over Egypt's political future after decades of dictatorship, a divide that has been compounded by a worsening economy and tenuous security.

An open conflict between Morsi's government and the church could add a new and potentially explosive layer, pushing Egypt to the brink of civil strife. Tawadros also warned that the state was "collapsing" and described Sunday's attack on the St. Mark Cathedral in central Cairo, which serves as the Coptic papal seat, as "breaching all the red lines." He said Morsi had promised him in a telephone conversation to do everything to protect the cathedral, "but in reality he did not." Asked to explain, Tawadros, who spoke in a telephone interview to a political talk show aired on the private ONTV network, said it "comes under the category of negligence and poor assessment of events." It was not clear whether he was accusing Morsi himself or whether he was addressing the president's government. 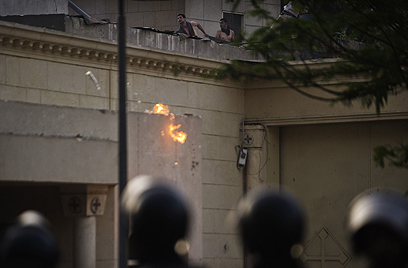 Presidential spokesman Ehab Fahmy said Morsi was in "constant contact" with the church over Sunday's violence and had dispatched three top aides to offer condolences to victims.

In the violence, an angry mob of Muslims threw firebombs and rocks at the Coptic cathedral in Cairo, leaving two people dead. One of the two was identified as a Christian.

The attack followed a funeral service for four Christians killed in sectarian clashes in a town north of Cairo early the day before. A fifth person, a Muslim, was also killed. It was the deadliest sectarian violence since Morsi came to office nine months ago as the country's first freely elected president.

"The church has been a national symbol for 2,000 years," Tawadros said. "It has not been subjected to anything like this even during the darkest ages ... There has been no positive and clear action from the state, but there is a God. The church does not ask for anyone's protection, only from God." 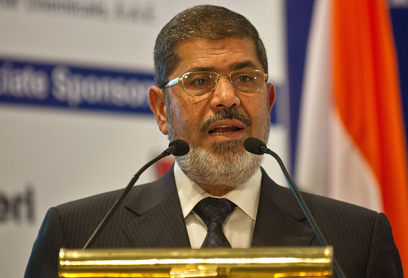 'Darkest ages.' President Morsi (Photo: AFP)
Tawadros also criticized the president over his decision on Monday to revive a state body mandated to promote equality between Egyptians regardless of their religious and ethnic background. Morsi's decision was in response to the sectarian violence. "Enough already of formations, committees and groups and whatever else," Tawadros said. "We want action not words and, let me say this, there are many names and committees but there is no action on the ground," he added. Morsi has strongly condemned the recent violence and said that he considered any attack on the cathedral to be an attack on him personally. He also ordered an investigation into the violence. "Should we wait for instructions to start an investigation when something happens?" Tawadros said in response to Morsi's order. "Egypt's laws must be adequate to deal with the situation. This is a society that is collapsing. Society is collapsing every day." The office of Morsi's assistant for foreign relations issued a statement dated Monday but emailed to reporters on Tuesday saying that the "Egyptian presidency would like to affirm its full rejection of violence in all its forms, and under any pretext, and affirms that all Egyptians are citizens who should enjoy all rights and are equal before the law." The statement said the presidency "will not allow any attempts to divide the nation, incite sedition, or drive a wedge among Egyptians under any pretense" and added that it has been "following these unfortunate events with great concern and has instructed all authorities concerned to exert their utmost efforts to contain the situation and protect the lives and property of citizens." Christians make up about 10% of Egypt's estimated 90 million people. Copts have complained for decades of discrimination and issues such as the building of houses of worship or inter-religious love stories often ignite Muslim-Christian violence. But attacks against Christians have increased since Mubarak's 2011 ouster, including more attacks on churches and at times forced evictions of entire Christian communities from small towns and villages. With Islamists politically empowered since the overthrow of Mubarak's regime, Christians have become increasingly worried about their freedom of worship and belief. During Sunday's funeral service at the St. Mark Cathedral, mourners chanted against Morsi, calling on him to step down. Witnesses say a street brawl broke out when Coptic activists tried to stop traffic to stage an anti-government march. A mob, described by witnesses as residents of the area, pelted the Christians with rocks and firebombs and fired birdshot at them, forcing them back into the cathedral complex. The mob outside and the Christians barricaded inside then exchanged rocks and firebombs for hours into the night Sunday. Many of the Christians denounced what they called a lack of protection for the service. When police did arrive in greater numbers, they fired tear gas, causing panic among women and children when some canisters landed inside the cathedral's grounds. Those outside the church cheered. Some firebombs thrown from near the church landed at a nearby gas station, while witnesses said some in the church lobbed firebombs at the crowd outside. Police said they have arrested four people implicated in the violence, but didn't provide details. Tawadros was not in the cathedral at the time of the siege.