Hagel on first trip to Mideast as US defense chief

US Defense Secretary Chuck Hagel on Saturday began a weeklong trip to the Middle East to consult with Israeli leaders on Syria's civil war and Iran's nuclear program and to discuss a set of US arms deals with Israel and two Arab countries.

On his first Mideast visit as Pentagon chief, Hagel planned stops in Israel, Jordan, Saudi Arabia, Egypt and the United Arab Emirates. Each is a longstanding US security partner, and each is concerned by the threat of Syria's collapse and Iran's suspected pursuit of a nuclear weapon.

Hagel's focus on Israel comes in light of the criticism he drew from some in Congress who opposed his nomination to be defense secretary. An unusually vigorous public campaign to block his nomination featured claims that he is "anti-Israel," a charge the former Republican senator vehemently denies. 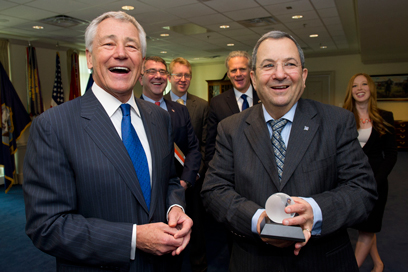 Hagen's bruising Senate confirmation hearing in February raised questions about whether he had been hard enough on Iran, but he repeatedly said he backed US and international penalties against Tehran for its suspected pursuit of nuclear weapons.

Some groups criticized Hagel's use of the term "Jewish lobby" to refer to pro-Israel groups seeking to influence lawmakers in Washington. He has publicly apologized and said he should have used different wording.

The US is finalizing $10 billion in arms deals with Israel, Saudi Arabia and the United Arab Emirates that will provide them with a range of weaponry, including aircraft and missiles. During his stop in each of those three countries, Hagel was expected to discuss details of each segment of those arms sales.

Hagel's visit to Israel comes one month after President Barack Obama was in Jerusalem to reassure Israelis of a US commitment to their security and to urge renewed efforts to move forward with Israeli-Palestinian peace talks.

Washington shares Israel's concern about the Syrian conflict posing a direct threat to the Jewish state, especially if Syria loses control of its sizable arsenal of chemical weapons.

Syria also will be at or near the top of Hagel's agenda when he meets with Jordanian officials in the capital, Amman. Earlier this month he approved the deployment of an Army headquarters unit to Jordan to work with Jordanian forces and to prepare for a range of future developments, presumably including a crisis over controlling Syria's chemical weapons.

At the center of the Pentagon's security consultations with Israel in recent years has been the threat of Iran's suspected pursuit of a nuclear bomb. Israel's worry is that Iran's nuclear program will progress technologically to the point where Israeli airstrikes could not stop it.

Iranian leaders insist their program is designed to produce electricity from nuclear reactors, not to manufacture an atomic bomb.

Speculation about an Israeli strike on Iran peaked in February 2012 with publication of a Washington Post column that said Leon Panetta, who was Pentagon chief at the time, believed there was a strong likelihood that Israel would launch an attack within a few months. The Obama administration has opposed an Israeli strike, and recently there has been relatively little talk about Israeli unilateral action.

Hagel's visit also coincides with renewed Obama administration interest in reviving Israeli-Palestinian peace talks. Secretary of State John Kerry, who was in Israel this month, has put new attention on the long-stalemated process.

On Wednesday, Kerry told the House Foreign Affairs Committee that he believes the "window for a two-state solution is shutting," referring to the notion of forging a deal that would enable Israel and Palestine to exist as separate states, each recognized by its neighbors. In a year or two, he said, that window will close.