As if they caught another bin Laden

In New York, armed soldiers who were deployed at every train station and outside every government building are slowly clearing the area. Television stations are returning to regular programming after the live broadcasts from Boston.

The terror attack at the finish line of the Boston Marathon did not, after all, signal the launch of a global terror attack on America or a horrifying repeat of the attack on the World Trade Center. It was, apparently, an act committed by two young men, which succeeded beyond their wildest dreams. It wasn't al-Qaeda, Hezbollah or some fringe right-wing organization. It was just two brothers – one suffered from too much hatred, the other was weak in character.
Campus Hatred
The battle for America
Tzipi Shmilovitz
Special: Israeli, Jewish students fighting back as hostility grows on leading campuses in America
The battle for America

Looking back at the whole affair, the manhunt for the two brothers appears to have been a classic case of overkill. Life in Boston and its suburbs was completely shut down. Some 7,000 soldiers, police officers and undercover federal agents surrounded one suspect, who was hiding in a boat in someone's backyard.

When he was finally arrested, thanks to an alert neighbor, the departure of the security forces from the area was accompanied by a national display of gratitude that would be more appropriate for the arrest of an arch-terrorist on the level of Osama bin Laden. 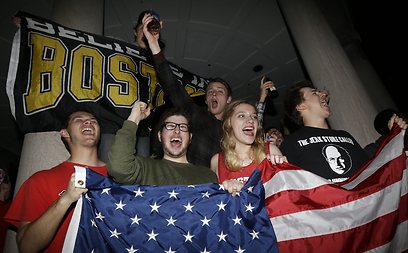 Celebrations in Boston (Photo: AP)
What was exposed here is the acute vulnerability of Western society to any intentional disruption of its daily life. Just two days after the Boston Marathon attack, 15 people were killed and hundreds more were injured in an explosion at a fertilizer plant in Texas. An entire town was destroyed. The disaster was not an act of nature - it was the result of negligence - yet it did not draw even one iota of the attention that was paid to the manhunt in Boston. There is a dangerous message here to every tormented teenager who is gathering information from the Internet on how to assemble bombs and to every disgruntled unemployed person who has watched too many crime shows on TV. The road to fame is short, and it does not take too much effort. You just need to pick the right event.