Op-ed: Why should we expect haredim to enlist in IDF when their schools teach them to reject national symbols?

The scene repeats itself each year: A few haredim do not stand still during the Memorial Day siren in honor of Israel's fallen soldiers; they hang black flags in their neighborhoods on Independence Day and publicly display their condescending attitude toward the national symbols that are important to the secular and national religious publics in Israel – as if to say that this is not their country and it is not their army.

Last Independence Day, for example, ultra-Orthodox children in Bnei Brak enthusiastically tore off Israel flags that were hung on buses traveling through the city and then tossed the flags away as their friends cheered. An ultra-Orthodox attorney wrote in one of the haredi newspapers that to him Independence Day is a regular day and he feels nothing for the country in which he lives.
Haredi-Secular Divide
Not your suckers anymore
Izhar Oplatka
Op-ed: Civil war possible if haredim refuse to accept changes demanded by younger generation
Not your suckers anymore
No, these are not examples of extremist haredim. And we, the citizens who contribute to the country and serve are shocked by such behavior on a day in which the Jewish nation mourns the soldiers who died for the homeland and on the day the nation celebrates its independence after 2,000 years in exile. Why do the haredim, or some of them at least, behave this way? Why do they trample over the symbols that represent the return of the Jewish nation to its homeland? Why are they so alienated from the flag, the national anthem and national grief? It would be easy to put another negative label on the haredim and use derogatory terms to describe the ultra-Orthodox community. But this would be wrong. Just like any other society, the haredi community consists of good and bad people, modest people and condescending ones. But they all treat our national symbols in the same manner, and many haredi leaders declare, in closed forums, that Independence Day is not a joyous day and that Memorial Day is a day of mourning for the secular and national religious population alone. Could it be that haredi education, which the ultra-Orthodox are so proud of, is what causes so many of them to reject Holocaust Remembrance Day, Memorial Day and Independence Day? Could it be that the State is funding schools which teach students to mock and reject every national symbol as though they were living in a country of goyim? The answer, unfortunately, is yes. Haredi schools do not teach students anything about the country's values and many of these schools insist on remaining open on Independence Day. 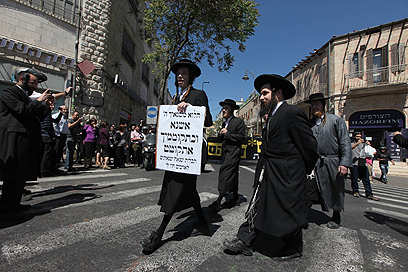 Haredim who turned secular say that it is forbidden to display national symbols or mention national values in ultra-Orthodox schools (it is absurd that Arab schools are obligated to wave the Israeli flag while haredi schools are exempt from waving it). On Memorial Day, they say, classroom windows are shut while the siren sounds, and teachers tell students that Memorial Day and Independence Day are not observed by the haredi public.

In other words, haredi education ignores the values of love for the country and loyalty to the State, so it should come as no surprise that the Internet is filled with advice for the haredim on how to dodge army service or how to convince their commanders to discharge them. It is not surprising therefore that haredi teens arrive at the IDF recruitment center and declare that they have no connection to the military. Why should we expect the haredim to enlist in the army when their schools do not teach them to be loyal citizens of their country?

The haredi is not innately bad; he is merely expressing the values the haredi education system instilled in him and caused him to become alienated from the State, the same State which subsidizes ultra-Orthodox society. True, some secular people also desecrate Memorial Day or reject national symbols, but this has nothing to do with the education they received in the public schools. Perhaps it is time for the Haredi Education Committee to discuss how to prevent an even deeper rift between young haredim and the rest of the Jews living in Zion. In any case, the control over the education of 20% of Israel's children should be given back to the State.