Analysis: Publicizing corruption scandals may be only remaining card Iran’s flamboyant president has left to defend himself

On April 18, President Ahmadinejad held a rally at Tehran’s Azadi Stadium to celebrate Iran’s recent tourism industry successes. In the days prior, Ahmadinejad’s political opponents, including within Iran’s clerical leadership, warned that the president would use the venue to campaign for his main political ally Esfandiar Rahim Mashaei.

Although a number of government officials were present at the rally, Mashaei did not make an appearance and no reference was made to the upcoming presidential elections. Mashaei’s possible candidacy for presidential elections in June 2013 has been a point of contention between the president and the clerical leadership, the latter maintaining that Mashaei’s secular leanings are a threat to their influence.

Reports indicate that attendance at the stadium, which can accommodate 100,000 people, ranged between 40,000 to 70,000 for Ahmadinejad’s rally. Many state-owned media outlets had refused to cover the event, although the IRNA news agency gave the highest number of 70,000.

The inability of Ahmadinejad’s camp to fill the Azadi stadium was coupled with an egress of supporters toward the end of the ceremony, as few people remained to hear the president’s final remarks. Reports further indicate that many of the attendees had been transported to the stadium from outlying areas, despite the president’s generally stronger support from the capital’s residents. Furthermore, scuffles between attendees and stadium employees over food distribution are indicative of possible incentives promised by Ahmadinejad’s camp in exchange for attending the rally.

It is therefore likely that the president made a decision not to present Mashaei at the rally, for fears of embarrassment over the low turnout. Despite threats of sanctions from the clerically-backed Guardian Council against using government funds for campaign rallies, Ahmadinejad likely sought to use the Azadi event as a show of force to his conservative rivals. Such a show of force would have provided a prime opportunity to campaign for his ally Mashaei, and possibly announce his official candidacy. 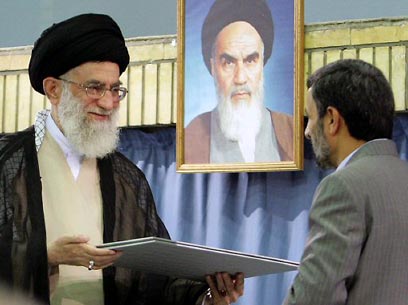 On May 7-11, Iran’s Guardian Council will undertake the vetting process for presidential candidates. The Guardian Council is dominated by Supreme Leader Khameini and has been known as a tool for the clerical leadership to control the election process by disqualifying potential political threats. In recent weeks, speculation has arisen that the Guardian Council would disqualify Mashaei, should he announce his candidacy. In anticipation of such a scenario, Ahmadinejad has threatened to release additional corruption scandals relating to Iran’s ruling class, including close allies of the supreme leader.

Until the April 18 rally, it was assumed that Ahmadinejad’s vast knowledge of corruption within Iran’s ruling class would be enough to deter the Guardian Council from preventing a possible Mashaei bid for the presidency. That said, the low turnout at the April 18 rally may decrease the clerical leadership’s concerns of a Mashaei win, if allowed to run. Therefore, the Guardian Council may allow Mashaei to run in the election under the assumption that he would fare poorly against their candidates. Approving a possible Mashaei candidacy under these assumptions would also mitigate Ahmadinejad’s threats of publicizing corruption scandals after May 11.

Until recently, Mashaei was feared to be rapidly gaining support amongst Iran’s urban, middle class. Like Ahmadinejad, Mashaei is known as a staunch nationalist who could appeal to this group’s pre-Islamic and Persian era identity perceptions, by advocating for a reduction of religious influences in the country.

In order to oppose Ahmadinejad’s camp, the clerical leadership has fielded several candidates, who identify themselves either as principalists or conservatives. Among over 13 official candidates from this stream, a coalition of three candidates, known as the 2+1 coalition, is increasingly likely to become the main conservative prospect. The coalition is composed of former advisor to the Supreme Leader Ali Akbar Velayati, former M.P. Gholam Ali Haddad Adel, and former Tehran Mayor Baker Ghalibaf. Of the three, Ghalibaf is believed to be the most popular and charismatic, so much that certain clerics have expressed concerns that he may also try to reduce their influence upon taking power. That said, Ghalibaf’s recent meetings with several prominent clerics in the religious city of Qom are suggestive that he may win the Supreme Leadership’s backing and oppose the Ahmadinejad camp in the upcoming elections.

In the days ahead of and during the May 7-11 vetting process, tensions between Iran’s various political streams are likely to increase, particularly if certain candidates are perceived to be unfairly disqualified. Any disqualification of an Ahmadinejad loyalist may prompt the president’s supporters to stage small-scale rallies in the capital, while the president himself may publicize corruption scandals, threatening to increase civil discontent in the long term.

With his continued political legacy at stake, these are the only remaining cards that Iran’s flamboyant president has left to defend himself. Fortunately for his conservative rivals, Ahmadinejad may never get the opportunity to play them.

The author is the Middle East and North Africa section intelligence director at Max Security Solutions, a geo-political risk consulting firm. You can follow him on Twitter at @Dannynis