Israel wary quiet on Syrian front about to end

Against a vista of green fields and snowcapped mountains, all is silent but for a gusting wind. Then comes a burst of gunfire from the Syrian civil war raging next door, where jihadist rebels are battling Bashar Assad's troops in a village.

Watching it all unfold from a few kilometers (miles) away are Israeli soldiers atop tanks behind a newly fortified fence, while a large-scale Israeli drill sends off its own explosions in the background.

This is the new reality on the Israeli-occupied Golan Heights, for 40 years the quietest of Israel's front lines, a place of hiking trails, bird-watching, skiing and winery tour. The military predicts all that will soon change as it prepares for the worst - a power vacuum in Syria in which rogue groups could get their hands of the country's large stockpile of chemical weapons. 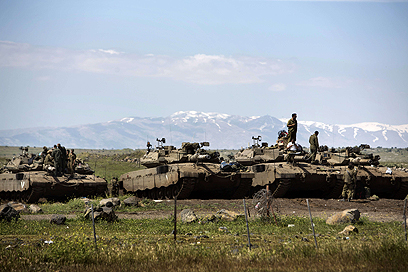 In many ways, a new era has already begun. The Syrian villages along the border change hands between military and rebel strongholds in daily battles. Their mortar shells and bullets frequently land on the Israeli side, including in some cases narrowly missing soldiers and civilians. A Syrian army tank shell landed in the border community of Alonei Habashan in February.

Though Israel believes these have mostly been cases of errant fire, it has responded with firepower of its own on several occasions in the first round of hostilities since a long-term armistice took hold after the 1973 Mideast war. 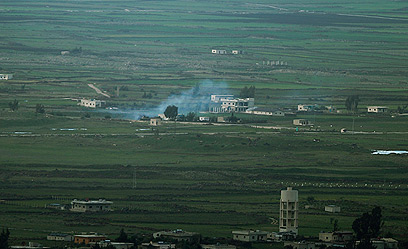 "This area became a huge ungoverned area and inside an ungoverned area many, many players want to be inside and want to play their own role and to work for their own interests," said Gal Hirsch, a reserve Israeli brigadier general who is involved in the military's strategic planning and operations.

"Syria became a place that we see as a big threat to Israel and that is why we started to work in the last two years on a strong obstacle, on our infrastructure, in order to make sure that we will be ready for the future. And the future is here already."

Officials say the military's present deployment on the plateau is its most robust since 1973, and its most obvious manifestation is the brand new border fence, 6 meters (20 feet) tall, topped with barbed wire and bristling with sophisticated anti-infiltration devices. The previous rundown fence was largely untested until it was trampled over last year by Syrians protesting on behalf of Palestinians. 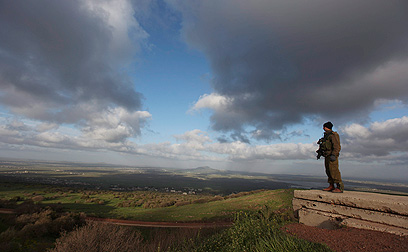 The military would not detail other measures it is taking, but stressed it was actively defining the new border arrangement now, before it's too late.

On the other side of the frontier, the village of Bir Ajam is in rebel hands and Israeli troops report watching them successfully deflect Syrian military pre-dawn raids almost daily. In a village nearby, Syrian intelligence and commando forces are based in concrete, windowless structures.

At the triangle where the borders of Israel, Syria and Jordan meet along the Yarmouk River, a lone jeep is seen crossing uninterrupted from Jordan into Syria. In March, rebels kidnapped 21 Filipino UN peacekeepers nearby. Thousands of refugees have used the route to flee the carnage into Jordan.

A few injured refugees have trickled into the Golan, and the military runs a field clinic to treat them. But there's no guarantee the trickle won't become a flood if Jordan in the south or Turkey in the north become unreachable.

"Syria right now is a kind of self-evolving system," Hirsch said. "No one can control or predict everything."

Israel, which borders southwestern Syria, has thus far been careful to stay on the sidelines of a civil war that has already claimed the lives of more than 70,000.

Assad is a bitter enemy, an ally of Iran and a major backer of Lebanese Hezbollah guerilla attacks

against Israel. But like his father whom he succeeded as president, he has faithfully observed US-brokered accords that ended the 1973 war. Israel worries that whoever comes out on top in the civil war will be a much more dangerous adversary.

Chief among Israeli concerns is that Assad's advanced weaponry could reach the hands of either his ally, the Hezbollah militant group in Lebanon, or Islamic extremist groups among the rebels trying to oust him.

"Syria is not a regular place ... it is the biggest warehouse for weapons on earth," Hirsch warned.

In an interview with BBC TV last week, Prime Minister Benjamin Netanyahu called the rebel groups among "the worst Islamist radicals in the world."

"So obviously we are concerned that weapons that are ground-breaking, that can change the balance of power in the Middle East, would fall into the hands of these terrorists," he said.

This week, a senior Israeli military intelligence official said Assad used chemical weapons last month. After initial denials, American and British officials confirmed the assessment of Brig. Gen. Itai Brun, the head of research and analysis in Israeli military intelligence, that the lethal nerve agent sarin was probably used. US President Barack Obama has warned that the introduction of chemical weapons by Assad would be a "game changer" that could usher in greater foreign intervention in the civil war.

For Israel, the specter of peace with Syria disintegrating adds to a growing sense of siege.

It saw the Gaza Strip fall to the militant Hamas movement in an election in 2006. And Egypt, the most populous Arab country and the first to make peace with Israel, is now ruled by the fiercely anti-Israeli Muslim Brotherhood. Israel has all but admitted that its warplanes destroyed a shipment of anti-aircraft missiles believed to be headed from Syria to Hezbollah in Lebanon in January, and on Thursday it shot down a drone which it claimed was operated by Hezbollah. (Hezbollah denied launching it.).

Hirsch, who commanded an Israeli division in a month long war with Hezbollah in 2006, said war regional roles have since then been reversed. While once Syria used Hezbollah in Lebanon as a proxy against Israel, Hezbollah is now deterred from acting on Lebanese soil for fear of Israeli retribution and is preparing to use the instability in Syria as its future staging ground.