Israeli soldiers evicted several hundred Bedouins from a village in the West Bank on Monday after the army declared the area a live-fire training zone.

The residents of Wadi al-Maleh, a village mostly inhabited by shepherds in the arid area bordering Jordan, had almost all left their homes by an evening curfew and retreated to neighboring villages, Aref Daraghmeh, a local leader, told Reuters.

The displacement coincided with several demolitions of Arab properties in the West Bank and east Jerusalem, which come as the United States is trying to revive stalled peace. 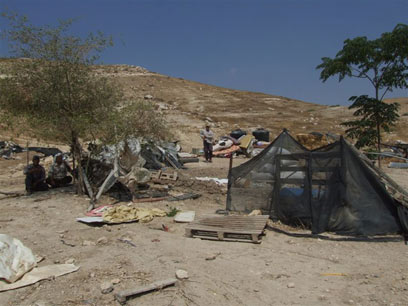 In January, villagers received a similar eviction order and left without resisting, only to return after 48 hours. Almost all of their 90 buildings, including shelters for their animals, were demolished in 2010, local rights groups said.

Israeli soldiers prevented outsiders, including journalists, from entering the area, saying it was a "closed military zone".

"It should be emphasized that these structures, located in closed military zones actively used by the IDF, are illegal in nature... the residents of these illegal structures have been requested in advance to vacate

"This drill is a part of the IDF's pre-planned yearly exercise schedule," the spokesperson said.