Silence of the lambs

Op-ed: America's promotion of 'softened Arab peace initiative' a spit in the face of Israeli democracy

The buds of peace are blossoming again, and, as always, they are being irrigated with Jewish blood. Eviatar Borovsky joined more than 1,500 "victims of peace" since Oslo – a huge political experiment with humans as lab animals.

Everything is planned in advance: Obama's visit, an onslaught of smiles and love to soften the land; the launching of the "John Kerry 1967 flight route"; flying a group of figureheads headed by the Qatari PM to Washington, supposedly on behalf of the Arab League, so they can speak of "minor" land swaps as a change in the "Arab initiative"; blowing this item out of proportion and presenting it as a "diplomatic turnaround"; making manipulative use of the term "changes to the 1967 borders" so Abbas will be able to say that his demand that the 1967 borders serve as a basis for negotiations has been accepted and Netanyahu will be able to climb down from his tree and claim that the "minor changes" mean we will not be returning to the 1967 borders; an urgent trip by Livni and Netanyahu's adviser Molcho to Washington in order to "keep the momentum going"; the establishment of a joint Israeli-Palestinian committee to select the terrorists Israel will release as an entry pass to the negotiations; and also a referendum, so Netanyahu will be able to hind behind the nation's back before he divides Jerusalem.
Israel-PA Conflict
Arab initiative - so what?
Hagai Segal
Op-ed: All Mideast peace plans begin with triumphant speeches on US lawns and end with pools of blood deep inside Israel
Arab initiative - so what?
I don’t mean to spoil the party, but in the interim the Arab League's spokesman told a reporter no changes have been made to the League's "peace initiative" from 2002. Even the bride is refusing: Palestinian Foreign Minister Riad Malki declared that Ramallah would not agree to even the smallest change in the Arab initiative. So what's new? Just one thing: Netanyahu's explanation for the new ploy – "to prevent a reality of a bi-national state"; just like Arik Sharon's "occupation" and Netanyahu's previous "two states" slogans, this one also constitutes a crossing of the Rubicon. Every member of the "national camp" understands Netanyahu's new slogan is an entry pass into the "peace camp" – similar to the past slogans "land for peace," "terror cannot be defeated," "you make peace with enemies" and other slogans that all turned out to be false. What's special about the new slogan is that it cannot be defeated by any Arab lie or abomination, because it does not require a partner and does not demand any reciprocation. The "reciprocation" is getting rid of the hated and damaging "territories." From now on Netanyahu does not need Molcho to supervise over Livni – there is no ideological difference between them. 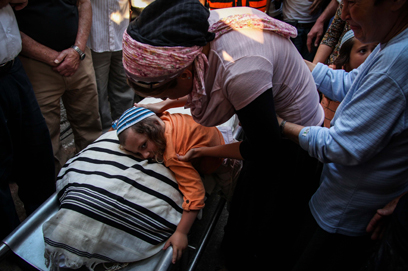 Naftali Bennett may find out that the alliance with Lapid was unilateral. Yaakov Peri and Yael German will not quarrel with Netanyahu over the Land of Israel, Labor will replace Habayit Hayehudi should it leave the coalition, and as for Shas – who knows where its new leader Aryeh Deri will take it?

Netanyahu took a hit in the recent elections because he was part of the Sharon government during the decisive stages of the Disengagement and also because of the Bar-Ilan speech. Zevulun Orlev was also deposed because of his insistence to remain in the Sharon government when his supporters were facing expulsion. Doesn’t Likud realize this will happen again if the party's hardliners – from Ya'alon to Tzipi Hotovely –will continue to sit back and do nothing under a converted leader who has switched ideologies? The votes that left the Likud went to Habayit Hayehudi, and the votes Orlev lost went to Bennett, but they will not stay there if the "two state" policy will be the official position of Likud and Habayit Hayehudi during the negotiations. The American ploy is a spit in the face of Israeli democracy. Likud went to elections with a constitution that rules out a Palestinian state, and it is still valid. The government's basic principles do not mention "two states," and the government never decided this was its policy. Those who remain silent now, like the lambs, will pay the price.