Eli Iluz accompanies Netanyahu and his wife on official visit despite the fact that he was not needed as a driver. PM's Office: Fringe benefit

Benjamin Netanyahu's driver joined the prime minister and his wife Sara on their official visit to China this week, at the taxpayers' expense, Yedioth Ahronoth reported Friday.

Eli Iluz has served as the PM's driver for nearly 20 years and is considered very close to the Netanyahu family. Netanyahu even promoted him to the post of "head of the drivers' division" in the Prime Minister's Office.

The decision to take Iluz to China as part of the PM's entourage "appears odd," Yedioth reported, "As he did not serve as a driver there, because local drivers were assigned to Netanyahu's entourage." Sources who took part in the trip said that instead of driving, Iluz carried Netanyahu and his wife's luggage and served as the couple's "adjutant." Sources within the PM's Office said Iluz was taken to China as a "fringe benefit." 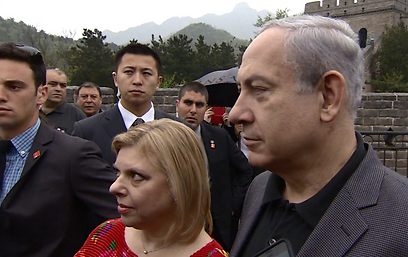 Iluz (third from left, in background)) with the Netanyahus on Great Wall of China

But the driver's trip cost the taxpayers' thousands of dollars. Netanyahu was criticized over his bloated entourage, which included five spokespeople and another five aides, at a time of sharp budget cuts.