The voices of BDS

Op-ed: Pro-Palestinian groups hijacked narrative of peace and justice, yet in reality they yearn for Israel’s destruction

The Boycott, Divestment and Sanctions (BDS) movement’s biggest success is rooted in its ‘soft power.’ The ability to influence behavior through values, policies, institutions and culture, as opposed to 'hard' or coercive power exercised through military or economic pressures, plays a tremendous role in the Israeli-Palestinian conflict.

Using soft power pro-Palestinian groups have been able to hijack the narrative of peace, justice and human rights while in reality they yearn for Israel’s destruction. One of their most important missions has been to convince notable individuals to join their campaign. Renowned physicist Stephen Hawking’s recent boycotting of President Shimon Peres’ annual conference in Jerusalem has become another feather in the cap of those who work so diligently to delegitimize and isolate Israel.

All of this takes place despite the well-understood fact thatBDS explicitly undermines legitimate academic discourse and is intellectually disreputable given its racist nature. Even the American Association of University Professors (AAUP) just last week, reiterated its opposition to academic boycotts stating, “in view of the association’s longstanding commitment to the free exchange of ideas, we oppose academic boycotts.”

Regardless, pro-Palestinian groups that include many Jews spread falsehoods far and wide to generate support for the Palestinian “victim." BDS founder and leader Omar Barghouti has built his entire career on demonization of Israel while hypocritically reaping the benefits of Israel. He studies at an Israeli university yet claims his studies are a "personal matter." If the BDS movement has its way, this is a privilege only he will enjoy, while ordinary Jewish and Arab students and faculty will have their personal academic studies politicized by him and his fellow extremists.

Judith Butler, a Jewish professor at University of California at Berkeley and a staunch supporter of Barghouti, continues to promote the perverse notion that Jewish values are incompatible with the idea of a Jewish state, since nation-states exercise violence and are a form of racism. Further, she loathes Israel to a point where she has unapologetically whitewashed Israel's foes, labeling Hamas and Hezbollah as "social movements that are progressive, that are on the left, that are part of a global left." 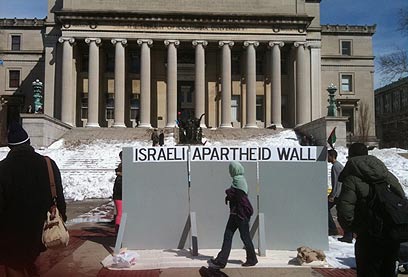 Other BDS activists like Yazid Sadi, a Palestinian musician living in Haifa and one of the organizers of a Palestinian music festival, claims that a central goal of the festival is to reverse the rapid assimilation, or “Israelization,” of Israel’s Arabs. Sadi compares BDS to chemotherapy saying, “It doesn’t distinguish between cancerous and good cells…it kills them all.”

In contrast to Barghouti, Butler and so many others, leaders like Sari Nusseibeh, the president of Al Quds University and Menachem Magidor, president of Hebrew University produced a joint declaration stating that only, “through cooperation based on mutual respect, rather than boycotts or discrimination, that our common goals can be achieved ...Our disaffection with, and condemnation of, acts of academic boycotts is predicated on the principles of academic freedom, human rights and equality between nations and among individuals.” While the BDS movement claims to champion the Palestinian cause, it doesn’t even come close nor does it further peace or support the idea of a two-state solution.

The BDS movement smacks of anti-Semitism: Targeting Israel and its advocates, and holding the world's only Jewish state to a far different and unrealistically high standard than any other democracy. Amidst flowery anti-imperialist rhetoric, the movement misleadingly implies that ending specific Israeli policies, deemed "apartheid" practices, would satisfy its backers. In fact, BDS supporters envision the replacement of Israel as a Jewish state with a bi-national, majority Palestinian, entity.

Israeli writer Daniel Gordis correctly states about the supporters of BDS that, “it doesn’t matter if they are in Israel or outside, or if they are Jewish or not. If they are working to end Israel, or to end it as a Jewish and democratic state, then they are our enemies, plain and simple. There are enemies who cannot be loved or compromised into submission, and you need to recognize that.”

The so-called “Palestinian global crisis” is only in the minds of those who propagate BDS rather than facts. For likeminded Jewish individuals such as Peter Beinart, Noam Chomsky, and many of JStreet and its followers, it boils down to them feeling uncomfortable with the measures Israel has taken in order to ensure its survival. The failure among such "open minded" Jews to understand the damage they do to the historical Zionist narrative by adopting the Palestinian one will only prolong the "occupation" they claim to stand up to rather than end it. Supporting any aspect of the BDS movement only makes the situation worse.