The security-related panic level usually begins to rise here whenever a professional body, such as the Air Force, reads the map through the narrow straw of its interests. When the Air Force feels threatened by the purchase of a certain weapon by the enemy, it pressures the General Staff, which cringes and causes the politicians to panic. From there, things spiral into fiery rhetoric and headlines.

The possibility of a threat is enough for the Air Force to activate sirens. Some three years ago, then-IDF Intelligence chief Amod Yadlin, an Air Force man, announced that Syria's purchase of anti-aircraft equipment will put the Air Force at the same disadvantage it faced during the Yom Kippur War. However, this can also occur when American weapons are transferred to a friendly Arab country.
Syrian Crisis
Sensing West's weakness
Alex Fishman
Op-ed: Russians will be the only ones to decide when and how Assad will step down
Sensing West's weakness
When the defense minister, prime minister and the rest of the cabinet ministers are experienced people, their strategic outlook is broad enough and they have enough self-confidence to neutralize such developments. But when we are dealing with a relatively new group, the whims do the job. This is how we reach mutual threats of war between Israel and Syria amid the purchase of S-300 missiles – a 20 year-old weapon. How strange. The Yakhont anti-ship missile Syria has already received from Russia poses a much greater threat to Israel than the S-300 missiles. The Yakhont is a particularly accurate cruise missile that can hit any strategic target in the State of Israel. The Jewish state is not attacking these missiles in Syria, as it would immediately be blamed for such a strike. Meaning, in Israel they know when not to cross the line. Only when it comes to the S-300 someone here got confused. The story of the S-300 missile deal with Syria appears on Russian websites. It is related by independent military experts and in the official annual reports of the Almaz-Antey corporation, which manufactures the weapon. These reports indicate that over the past few years the corporation has rarely produced weapons designated for foreign countries. This means that the arms deal with Syria does not include the sale of advanced systems manufactured by the corporation. 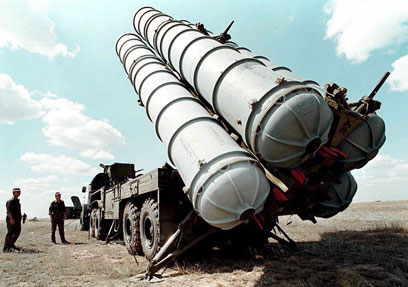 In essence, this is a deal between Syria and the Russian army. The Russian army is replacing its S-300 anti-aircraft systems with advanced S-400 systems. The systems it is not using anymore are sold to countries such as Syria. However, the pace and quality of the production of the new missiles is very problematic, so the transfer of the advanced batteries to the Russian army is well behind schedule. Therefore, unless Putin gives a direct order to the army to transfer its S-300 batteries to Syria, the Assad regime will not see the missiles in the near future.

According to reports in Russia, the Syrians will receive six advanced S-300 systems, each consisting of 12 missile launchers. They will also get and 144 missiles – or two missiles for each launcher. These systems are large and cumbersome. Each rocket is nine meters (about 30 feet) long and weighs two tons. The probability that such a system would not be detected by western intelligence satellites, which pass over the Syrian port city of Tartus every few hours, is very low. Moreover, as stated, these systems are 20 years old. In the past it has been reported that the Israeli Air Force trained in Cyprus and Crete, in cooperation with the Greek Air Force, which operates S-300 batteries. So it is safe to assume that this weapon cannot surprise Israel. It seems that someone here fears the panic surrounding the S-300 missiles has been exhausted, so he is trying to make a fuss over the supply of MiG-29 jets to Syria. The Air Force is probably much more pleased with this latest purchase by Assad. When it comes to shooting down planes, the Israeli Air Force has a clear advantage.