Prime Minister Benjamin Netanyahu accused Iran and its Palestinian and Lebanese allies on Sunday of carrying out "non-stop" cyber attacks on major computer systems in Israel.

He gave no details on the number of attacks but said "vital national systems" had been targeted. Water, power and banking sites were also under threat, he added. The comments came hours after a Syrian hackers' group paraded the secret information it had allegedly obtained by means of a cyber attack on Haifa's water system some two weeks ago.

"In the past few months, we have identified a significant increase in the scope of cyber attacks on Israel by Iran. These attacks are carried out directly by Iran and through its proxies, Hamas and Hezbollah ," he said, speaking at a conference on cyber warfare in Tel Aviv University. 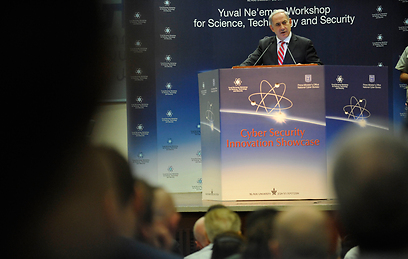 In regards to a solution, the prime minister said that "We aspire to set up a digital Iron Dome, to get a head start over our enemies in the never ending contest." Hence, he has asked the IDF's Cyber Unit "to come up with a proposal on how to export our cyber capabilities."

"Despite the non-stop attacks on us, you hear only about a few of them because we thwart most of them," he added. Netanyahu established a national cyber directorate in 2011 charged with protecting Israel's computer systems from disruption. Israel and the United States are widely believed to be behind a series of cyber attacks in recent years against an Iranian nuclear program they say is aimed at developing atomic weapons. Iran says its nuclear activities are peaceful. Two months ago, Israel said it weathered a pro-Palestinian cyber attack campaign against government websites. Israeli officials said those attacks briefly disrupted several sites and security protocols were updated in response.