This month, the Pew Research Center published results of a public survey of gay tolerance in 39 countries worldwide, the question being "Should society accept homosexuality?"

Among the least tolerant nations surveyed was Pakistan, where only 2 percent of those surveyed said 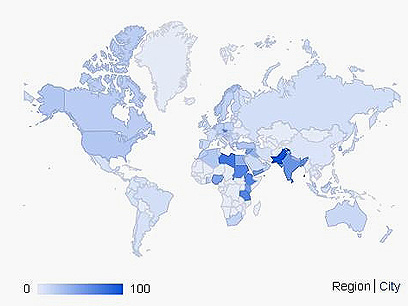 Pakistan also ranks second in the world (after similarly gay-intolerant Kenya) for volume of searches for the search term "gay sex pics."

In its report, Pew noted that countries exhibiting the highest levels of gay tolerance are largely secular, whereas nations where religion is central to public life—such as Egypt, Nigeria, and Pakistan—tend to reject homosexuality.

According to the article, in Pakistan, the highest number of hits for some of these terms, including "shemale sex," come not from Pakistan's cosmopolitan centers, but from Peshawar, a bastion of conservative Islam, lately known in the West as a counterterrorism frontline.

Farahnaz Ispahani, an expert in Pakistani minorities at the Woodrow Wilson International Center for Scholars and a former member of Pakistan's parliament, told Mother Jones that homosexuality is a taboo subject throughout the country.

In major cities such as Lahore and Karachi, gays can develop a network of allies outside their tribe or family, but in conservative Peshawar, gay identity is more complicated.

"The real love they can have that most of us find with a partner, they find with men," Ispahani told Mother Jones. "They mostly see their wives as the mother of their children."

At the same time, she said, persecution of minorities, including gays, has reached an all-time high in Pakistan, and discussing homosexuality openly in public is virtually forbidden. "Religious extremism is at a height today," she says.

"Hindus are being forced to convert, Christians are being burned alive—there's very little personal safety for those seen as 'the other.' So what do (gay Pakistanis) do? They turn to pornography because they can't live their lives openly."