What Obama can (and should) do about Iran

Americans' news feeds are overflowing with images of domestic scandals, protests in Turkey, and war in Syria. But the real story is Iran. By year's end, we may be confronted with a choice: Accept a nuclear-armed Iran, or support a military action to delay the program.

President Obama's policy on Iran has failed. Diplomacy has fizzled. And even The New York Times' news page and Obama's former advisors agree that sanctions aren’t working. And this is why Obama’s reaction to the recent Iranian election is so troubling.
New President
Beware of Rohani's trap
Ron Ben-Yishai
Analysis: Israel must make certain Obama, Ashton are not dazzled by seemingly moderate Iranian president-elect
Beware of Rohani's trap
As many others have noted, Rohani’s election will likely change very little in terms of Iran’s nuclear weapons program. The nuclear program is entirely controlled by Supreme Leader Khamenei (who personally approved Rohani’s candidacy). And Rohani has previously articulated a strategy whereby Iran would continue to build a nuclear weapons program, while trying to convince the world that it was not doing so.

This is even worse than Ahmadinejad – at least he was honest with us.

Nonetheless, the Obama Administration said it was encouraged by the election of such a “moderate” candidate and would pursue diplomatic negotiations with his new government. Yes, the election does demonstrate that Iranians are discontent. But we already knew that. There is no sign, however, that the mullahs have altered their calculation regarding the nuclear program. In fact, they are racing ahead at record speed. By announcing a new round of talks, without requiring Tehran to make any meaningful concessions first, Obama is just giving Tehran more time to pursue a nuclear bomb without repercussions. Obama tried a similar “open hand” policy when he entered office. In return, Iran sponsored terrorism, sped up its nuclear program, and used murder and violence to crush the Green Revolution. How could Obama be so naïve to make the same mistake again? But criticizing Obama (as I and many others have done) is easy. What's difficult is finding an effective solution to the problem. President Obama is not a malevolent or incompetent man. If there were an easy, or even moderately difficult, answer to the Iranian crisis, he would have taken it by now. Every possible solution presents serious consequences for the United States and the international community. But although President Obama is not incompetent, he has not shown the leadership, resolve, or bravery to make the difficult decisions on Iran. Instead, he's decided to drift along the present course as Iran races towards a nuclear weapon. Not only is this ineffective, it is dangerous. President Obama has shown the mullahs there will be no consequences for their actions, which has only emboldened Iran, and made a nuclear-armed Iran more likely.

At least he was honest. Ahmadinejad at Iranian nuclear plant (Archive photo: AP)

So what should Obama do? The first answer is anything. Right now, the Iranians do not take Obama's warnings seriously because he has not lived up to his past promises. Iran continues to make a masquerade of negotiations, but Obama continues to pursue them. Assad crossed Obama's "red line" in Syria, but Obama took months to react. Our "allies" such as Russia are turning into tyrannies before our eyes, and the president refuses to confront them.

President Obama needs credibility on the international stage, and he needs it now. There is no magic bullet for achieving this, however. Obama simply needs to start backing up what he says, and flexing America's hard and soft power. Arming Syrian rebels was a good start, but Obama must follow through here. Other ideas for building credibility include an even stronger stance in Syria, pressuring our allies to go after Iranian-sponsored Hezbollah, bringing real consequences to bear on Vladimir Putin for his outrages at home and abroad, and taking a more aggressive posture on North Korea. 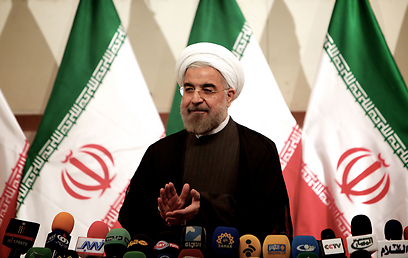 Unfortunately, even if President Obama were able to rebuild US credibility in these areas, it might be too late to have a meaningful impact on Tehran's behavior.

The most obvious way to wake up the mullahs would be to seek an advance Congressional authorization of military force against Iran's nuclear program. President Obama has said that a nuclear Iran is unacceptable and that all options are on the table to prevent it. Thus far, Obama has tried every option except for two: The serious threat of military force or the actual use of force. If President Obama still believes a nuclear Iran is unacceptable, he must choose one of these options. We can all agree that a threat of military force that compels Iran to change its behavior is preferable to the actual use of force. But for this threat to work, Iran must actually believe it. So what can Obama do to prove to Iran's leaders that this time will be different? First, he should make good on previous promises in places such as Syria. Next, Obama should undertake a series of speeches to explain to the American people why a nuclear armed Iran is unacceptable, and why the use of force is necessary to prevent it. This would show the Iranians that Obama is serious about building the public support necessary to use force. Finally, President Obama should publicly announce that he would support an Israeli strike against Iran if Israel has proof that Tehran is on the verge of a nuclear breakout. The mullahs might continue to ignore these warnings, but if they really believed that Obama was serious, they might not. If Iran continues to pursue a nuclear weapon, Obama will be confronted with the most serious test of his presidency: Should he launch a military strike against Iran or let Tehran obtain a nuclear weapon? The dangers of a military strike are obvious. First, it could lead to a full out confrontation with Iran, lead Iran to retaliate against America with conventional and unconventional attacks, and inflame worldwide sentiment against the United States. Next, a US attack could rally the Iranian people around the current regime - which is somewhat antithetical to our goals. The only peaceful way to stop the Iranian nuclear program would be an internal revolt or regime change. Given how effectively Iran crushed the Green Revolution, and the world's unwillingness to aid the Syrian rebels, an internal revolution seems nearly impossible. Nevertheless, an American attack could rally support for the regime, and destroy any chance of a future uprising. Finally it's unclear that a military strike could destroy the Iranian program completely or significantly impede it. It's likely that we can, but this situation is still a known unknown. So is a strike worth it if all other options fail? Reasonable Americans can disagree, but there are strong reasons to support a strike. A nuclear armed Iran would be emboldened to export and sponsor even more acts of terror and violence, continue its nefarious activities in the region (which, including its support for Assad, have contributed to the deaths of more than 100,000 people - including Americans), make the regime immune to any future military attack no matter how horrendous its behavior, and spur a Mideast nuclear arms race. Still, it's easy to see why President Obama is reluctant to use force because the risks are severe. And although a nuclear-armed Iran would be a disaster for the Mideast and the world, it probably does not pose a mortal danger to America's existence. Israel, on the other hand, would be mortally threatened by a nuclear Iran. For the Israelis, a military strike against Iran is probably a much easier decision (although the consequences would be greater for Israel, so would the threat of a nuclear-armed Iran). President Obama should use this to his advantage, and announce his support for an Israeli attack. This would let Obama avoid committing US forces (at least at the outset), and offset some of the negative consequences of a US-led strike. There is a possibility that the US might need to get more aggressively involved if the Israelis don't succeed in taking out the program, or if Iran and its neighbors retaliate so severely that Israel’s existence is threatened. Nevertheless, the consequences would still probably be less than if the United States initiated a strike on its own. Hopefully, President Obama never has to make this choice. But if Obama really means what he says about preventing a nuclear Iran, this might be his least bad option. David Meyers worked in the Bush White House from 2006 to 2009, and later in the Senate