The security sources said a soldier was killed and two were wounded when a police station in Rafah on the border with the Gaza Strip came under rocket fire. The police post is close to the local headquarters of military intelligence.

Earlier, attackers fired rocket-propelled grenades at army checkpoints guarding El Arish airport, close to the border with the Gaza Strip and Israel, in the latest of a string of security incidents in the lawless region, the sources said.

It was not clear whether the attacks were coordinated and in reaction to Morsi's removal. Islamist terrorists believed to have links to al-Qaeda have established a foothold in the sparsely populated desert peninsula, sometimes in league with local Bedouin smugglers and with Palestinian terrorists from Gaza.

Egypt has struggled to control security in the region since the ousting of autocratic President Hosni Mubarak in 2011.

Earlier this week the IDF said Egypt moved forces into the border area near the Gaza Strip in coordination with Israel.

With unrest sweeping the country, Egypt is believed to have moved several dozen armored vehicles to the volatile border area to contain terrorist activity.

On Thursday Egypt's military moved swiftly against senior figures of the Muslim Brotherhood, targeting the backbone of support for ousted Morsi. In the most dramatic step, authorities arrested the group's revered leader from a seaside villa and flew him by helicopter to detention in the capital.

With a top judge newly sworn in as interim president to replace Morsi, the crackdown poses an immediate test to the new army-backed leadership's promises to guide Egypt to democracy: The question of how to include the 83-year-old fundamentalist group.

That question has long been at the heart of democracy efforts in Egypt. Hosni Mubarak and previous authoritarian regimes banned the group, raising cries even from pro-reform Brotherhood critics that it must be allowed to participate if Egypt was to be free. After Mubarak's fall, the newly legalized group vaulted to power in elections, with its veteran member Morsi becoming the country's first freely elected president.

Now the group is reeling under a huge backlash from a public that says the Brotherhood and its Islamist allies abused their electoral mandate. The military forced Morsi out Wednesday after millions of Egyptians nationwide turned out in four days of protests demanding he be removed. Adly Mansour, the head of the Supreme Constitutional Court, with which Morsi had repeated confrontations, was sworn in as interim president. In his inaugural speech, broadcast nationwide, he said the anti-Morsi protests that began June 30 had "corrected the path of the glorious revolution of Jan. 25," referring to the 2011 uprising that toppled Mubarak. To cheers from his audience, he also praised the army, police, media and judiciary for standing against the Brotherhood. Islamists saw those institutions as full of Mubarak loyalists trying to thwart their rule. Furious over what it calls a military coup against democracy, the Brotherhood said it would not work with the new leadership. It and harder-line Islamist allies called for a wave of protests Friday, dubbing it the "Friday of Rage," vowing to escalate if the military does not back down. Multiple officials of the Brotherhood firmly urged their followers to keep their protests peaceful. Thousands of Morsi supporters remained massed in front of a Cairo mosque where they have camped for days, with line of military armored vehicles across the road keeping watch. 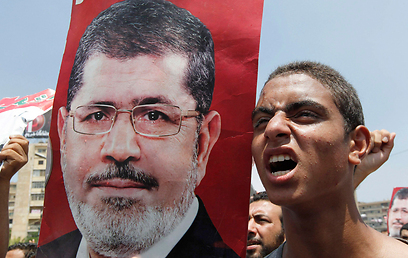 "We declare our complete rejection of the military coup staged against the elected president and the will of the nation," the Brotherhood said in a statement, read by senior cleric Abdel-Rahman el-Barr to the crowd outside the Rabia al-Adawiya Mosque in Cairo.

"We refuse to participate in any activities with the usurping authorities," the statement said, urging Morsi supporters to remain peaceful. The Rabia al-Adawiya protesters planned to march Friday to the Ministry of Defense. The Brotherhood denounced the crackdown, including the shutdown Wednesday night of its television channel, Misr25, its newspaper and three pro-Morsi Islamist TV stations. The military, it said, is returning Egypt to the practices of "the dark, repressive, dictatorial and corrupt ages." A military statement late Thursday appeared to signal a wider wave of arrests was not in the offing. A spokesman, Col. Ahmed Mohammed Ali, said in a Facebook posting that that the army and security forces will not take "any exceptional or arbitrary measures" against any political group.

The military has a "strong will to ensure national reconciliation, constructive justice and tolerance," he wrote. He spoke against "gloating" and vengeance, saying only peaceful protests will be tolerated and urging Egyptians not to attack Brotherhood offices to avert an "endless cycle of revenge."

The army's removal of Morsi sparked massive celebrations Wednesday night among the crowds of protesters around the country, with fireworks, dancing and blaring car horns lasting close to dawn. The constitution, which Islamists drafted and Morsi praised as the greatest in the world, has been suspended. Also, Abdel-Meguid Mahmoud, the Mubarak-era top prosecutor whom Morsi removed to much controversy, was reinstated to his post and immediately announced investigations against Brotherhood officials. Many of the Brotherhood's opponents want them prosecuted for what they say were crimes committed during Morsi's rule, just as Mubarak was prosecuted for protester deaths during the 2011 uprising. In the past year, dozens were killed in clashes with Brotherhood supporters and with security forces. But the swift moves raise perceptions of a revenge campaign against the Brotherhood. The National Salvation Front, the top opposition political group during Morsi's presidency and a key member of the coalition that worked with the military in his removal, criticized the moves, saying, "We totally reject excluding any party, particularly political Islamic groups." The Front has proposed one of its top leaders, Mohammed ElBaradei, to become prime minister of the interim Cabinet, a post that will hold strong powers since Mansour's presidency post is considered symbolic. ElBaradei, a Nobel Peace laureate who once headed the UN nuclear watchdog agency, is considered Egypt's top reform advocate. "Reconciliation is the name of the game, including the Muslim Brotherhood. We need to be inclusive," Munir Fakhry Abdel-Nour, a leading member of the group, told The Associated Press. "The detentions are a mistake." He said the arrests appeared to be prompted by security officials' fears over possible calls for violence by Brotherhood leaders. There may be complaints against certain individuals in the Brotherhood "but they don't justify the detention," he said, predicting they will be released in the coming days. Abdel-Nour said the Front intends to ensure the military has no role in politics. He added that the Front is hoping for the backing of ultraconservative Salafis for ElBaradei's bid for prime minister. Some Salafi factions have sided with the new leadership. He noted that the constitution was not outright canceled, in a gesture to Salafis. Morsi has been under detention in an unknown location since Wednesday night, and at least a dozen of his top aides and advisers have been under what is described as "house arrest," though their locations are also unknown. Besides the Brotherhood's top leader, General Guide Mohammed Badie, security officials have also arrested his predecessor, Mahdi Akef, and one of his two deputies, Rashad Bayoumi, as well as Saad el-Katatni, head of the Brotherhood's Freedom and Justice Party, and ultraconservative Salafi figure Hazem Abu Ismail, who has a considerable street following. Authorities have also issued a wanted list for more than 200 Brotherhood members and leaders of other Islamist groups. Among them is Khairat el-Shater, another deputy of the general guide who is widely considered the most powerful figure in the Brotherhood. The arrest of Badie was a dramatic step, since even Mubarak and his predecessors had been reluctant to move against the group's top leader. The ranks of Brotherhood members across the country swear a strict oath of unquestioning allegiance to the general guide, vowing to "hear and obey." It has been decades since any Brotherhood general guide was put in a prison. Badie and el-Shater were widely believed by the opposition to be the real power in Egypt during Morsi's tenure. Badie was arrested late Wednesday from a villa where he had been staying in the Mediterranean coastal city of Marsa Matrouh and flown by helicopter to Cairo, security officials said, speaking on condition of anonymity because they were not authorized to talk the press. Mahmoud, the top prosecutor, said he was opening investigations into the killings of protesters during Morsi's rule. He ordered el-Katatni and Bayoumi questioned on allegations of instigating violence and killings, and put travel bans on 36 others, a sign they too could face prosecution. He also took steps toward releasing a prominent activist detained for insulting Morsi. Mansour, the 67-year-old interim president, is a Mubarak appointee like nearly every judge. He had been the deputy head of the court for more than 20 years. He was elevated to the chief justice position only three days ago, when his predecessor reached mandatory retirement age. Mansour was among the judges who ruled against a political isolation law in 2012 that would have barred many Mubarak-era officials from politics. As a result, Mubarak's last prime minister, Ahmed Shafiq, was able to run against Morsi. In his speech, Mansour said the massive street demonstrations "brought together everyone without discrimination or division," and were an "expression of the nation's conscience and an embodiment of its hopes and ambitions." But he made no sign of outreach to the Brotherhood in his address. He suggested Morsi's election had been tainted, saying, "I look forward to parliamentary and presidential elections held with the genuine and authentic will of the people."

The revolution, he said, must continue so "we stop producing tyrants."