Ibrahim brothers were close until army in which one of them serves deposed Morsi. 'It is no longer possible to support Egypt and support the army. Those two things are incompatible,' other brother says

Islam Ibrahim has no idea if his older brother Nasim was one of the Republican Guardsmen shooting at him when he and hundreds of other Egyptians were wounded and more than 50 killed.

The brothers, who moved together to Cairo from a village near the Suez Canal, stayed close until last week, when the army in which Nasim serves toppled the president that Islam has vowed to defend.

"I don't know if he was there with them or not," said Islam, 24, with a bandage from a gunshot on his knee and an open wound from birdshot on his shoulder.

"I don't like to think about it. If he was, I know he wouldn't fire on unarmed demonstrators," he said. He sat on a plastic chair behind the stage at the camp near a Cairo mosque where thousands of supporters of the deposed president, Mohamed Morsi, say they will keep a protest vigil until he is restored.

The overthrow of Morsi, Egypt's first democratically elected president, has split the country like no other event in memory, dividing brothers from brothers, fathers from sons and husbands from wives.

Two days after the army ousted Morsi following escalating street protests against his rule, Islam called his brother to invite him to a pro-Morsi rally.

"He said I should be at home celebrating and that the army had saved the country from chaos," recalled Islam. The brothers have not spoken since.

A few days later, Islam was among protesters outside the headquarters of his brother's Republican Guard when they were fired upon in one of the deadliest incidents in more than two years of political unrest.

"I was still praying when I heard the gunfire. I was 300 meters away from the soldiers. They were shooting teargas over our heads," said Islam, clutching a walking cane in one hand and a Koran in a brown leather case in the other. 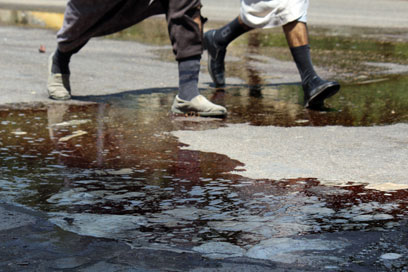 "I heard bullets flying in all directions. Everyone was running left and right. Some of my friends were throwing rocks at the soldiers. We made a shield out of steel traffic barriers, but my leg was sticking out and a bullet struck me in the knee.

"My friend helped me stop the bleeding with his shirt. As I was running back another bullet hit me in the shoulder."

The army says the violence was provoked by terrorists who attacked its troops. The Brotherhood says its supporters were fired upon while peacefully praying. Footage circulated widely on the Internet shows uniformed snipers firing from rooftops.

The most chilling of those videos was filmed by Ahmed Assem, a baby-faced 26-year-old photographer for a Muslim Brotherhood newspaper. The footage shows a sniper shooting off to one side, then suddenly turning straight towards the photographer and firing. Assem's camera blacks out at the moment of impact from the shot that killed him.

Assem too came from a divided family: he was the only Morsi supporter in a household raised to despise the Brotherhood.

His father Samir Assem, a doctor, is furious that the Brotherhood has declared his son a martyr: "Trading in blood. Trading in blood," he says angrily.

The slain photographer's older brother Eslam, who picked up the body at the morgue on Monday, is a captain in the police. Photos in a frame at the family home show the two men, the younger smiling in a button-down shirt, the older standing proudly in his dress uniform.

The brothers occasionally used to chide each other about their allegiances, said Eslam.

"I would speak to him, like any two brothers," he recalled at the family home in a middle-class Cairo district. "'Leave the Muslim Brotherhood.' 'No, you leave the Ministry of Interior.'"

Eslam has no doubt that the video his brother filmed shows he was an innocent victim of a deliberate killing by a soldier who picked him out of the crowd.

"His only crime is that he is recording a video. He has no gun, no pistol, no nothing in his hand, but a camera," he said. He plans to report the killing to prosecutors, to try to bring the soldier who killed his brother to justice. 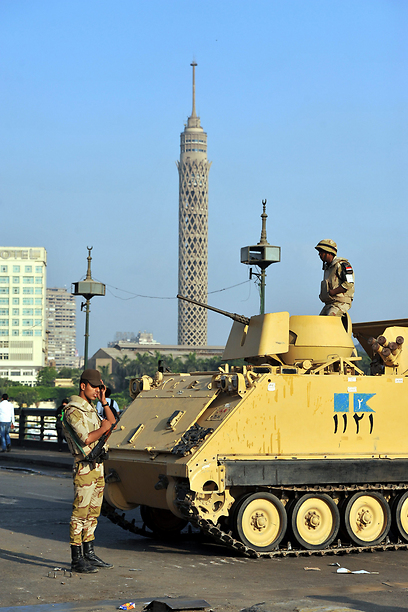 Back at the tent at the Brotherhood camp, Islam Ibrahim tells of how close he and his soldier brother were when they moved to Cairo three years ago. Nasim was sent to the capital to serve in the Republican Guard; Islam found a job teaching Arabic at a mosque.

Their father, head of a tourism company, had been a member of the Brotherhood in the 1980s and 90s who quit after he was arrested and tortured by autocrat Hosni Mubarak's secret police. Islam joined the Brotherhood at 18 after he heard a sermon from a preacher from Alexandria. He revealed his membership to his father but kept it from his mother so she would not worry.

The brothers' politics overlapped during the 2011 revolution that toppled Mubarak. They attended protests together then, but drifted apart a bit after Mubarak's fall. Islam knew that Nasim disapproved of his ties to the Brotherhood. Still, they had remained on good terms until now.

Today, he cannot imagine how Nasim can remain in an army that toppled an elected president and shot so many people.

"He has to leave the army now. It is no longer possible to support Egypt and support the army. Those two things are incompatible," Islam said.

"I have called him but he doesn't answer his phone."