The real preconditions for peace

Op-ed: Victimization myth of Palestinians needs to give place to a concrete dialogue of shared interests

As Secretary of State Kerry is maintaining his push for renewed negotiations between the State of Israel and the Palestinian Authority, attention is as always drawn to the presence or not of preconditions set by the Palestinians. These demands are in fact meant to precede the start of any substantial talk that may or may not lead to enhanced peace negotiations.

If there is absolutely no doubt that the questions relating to borders, Palestinian populations living in Arab countries, the status of Jerusalem and the development of housing and infrastructure projects in Judea and Samaria need to be fully addressed and answered clearly to make of any deal a lasting one, it is also absolutely true that these points are in no way the preconditions to peace, they are in fact the results of peace.

The term precondition literally signifies an element or an ensemble of elements which must be verified before the subsequent steps of a project can be achieved. The above mentioned points are not preconditions for peace, an agreement over them will in fact represent the main lines of what a peace deal would be between Israel and the Palestinians.
Referendum on Peace
Trick question
Aviad Kleinberg
Op-ed: Bennett's call for referendum an attempt to place another obstacle on road to peace agreement
Trick question
If these concerns are not to be considered as the natural preconditions for peace, it does not mean that there are none. In fact, in a region that has virtually known war for the last six decades, building peace, enhancing trust and maintaining the agreed upon terms necessitate an enormous preparatory effort which is instrumental for the success of any round of negotiations. The real preconditions for peace between the Jewish State and the Palestinians can be defined as follows: A single and legitimate Palestinian political body needs to be identified, Arab states and societies need to accept the concept of peace, and the international community should move to stop the current demonization of Israel. 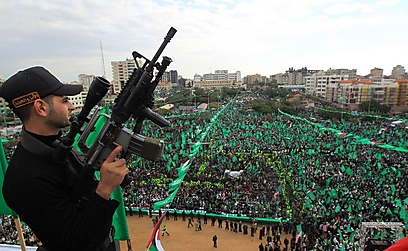 The first precondition that needs to be set, both by Israel and the Palestinians, covers the issue of the legitimacy of any negotiated deal. In fact, prior to any round of talks the Hamas leadership states that the Gaza-based movement will not recognize or accept any agreement which may result from the contacts between the government of Israel and Mahmoud Abbas. The weak PA president has little support inside his own territory and is certainly not able to stop any violent action undertaken by a well-armed and battle tested terrorist organization. As the international community pushes for a two-state solution, the lack of a single Palestinian interlocutor makes such a drive utterly unrealistic. The willingness by Hamas to wage war against Israel will continue to result, in the short and medium term, in Israel defensive operations.

This situation will not lead to a true peace between the two entities. For this, the first precondition consists in reconciliation between the PA and Hamas. It would be fundamental to have a common statement accepting the necessity for peace talks and a Palestinian united negotiating team able to govern and control Judea, Samaria as well as Gaza in order to be able to concretely provide Israel with security along its borders. The second precondition that needs to be addressed is the real intention of the regional powers to live in a peace with Israel. Recent polls indicate the willingness by the Israeli population to recognize the need for peace. The same is needed from the Arab side. It is in fact true that the Arab societies’ view on the conflict highly influence the outcome of any negotiations. The roaring anti-Semitism alongside the continued vilifying of the Jewish State added to the inability by the majority of Arabs scholars and policy makers to undertake an objective and direct talk over the ongoing situation are all factors limiting the possibility of peace. War hasn’t ceased in Europe because peace was imposed by political leaders or outside powers, but because the whole region understood the benefits of peace. A necessary precondition is then found in the need by Arab societies and their leaders to accept the presence and the nature of Israel in order to denounce any spoiler group which would use force at the expense of Israeli and Palestinian well-being. The third precondition may appear as more general but should be regarded as essential. The PA and the overall Palestinian society relies heavily on the international society as governmental bodies, NGOs and exchange study programs are the backbone of the economic development and the social dynamism of the Palestinian society. For this it is necessary for any peace process to succeed in being supported by non-Arab and international associations and organizations. The network of pro-Palestinian campus based and intellectual foundations is doing more harm than good to peace as it lives on a rhetoric built upon a continuous war against Israel. The self-entertained victimization myth of the Palestinians needs to give place to a concrete dialogue of shared interests. This can be done and incentivized by out-of-the region organizations as they craft and create a narrative which is then transmitted globally. These preconditions are, as the term itself is meant to indicate, three points that must be in place prior to any negotiations meant to succeed. The acceptance of Israel as the Jewish State living in peace with its Palestinian and Arab neighbors must be made clear by a single Palestinian authority, supported by Arab States and pushed forward by the international community. Following this, a sincere negotiation over the pragmatic realities on the ground can start.

Riccardo Dugulin holds a Master degree from the Paris School of International Affairs (Sciences Po) and is specialized in International Security. He is currently working in Paris for a Medical and Security Assistance company. He has worked for a number of leading think tanks in Washington DC, Dubai and Beirut. His personal website is www.riccardodugulin.com