In interview with The Telegraph, international relations minister says demilitarized Palestinian state 'only possible solution' to conflict; warns Iran's Rohani will 'smile all the way to the bomb' unless stopped by West

In an interview with The Telegraph, published Friday, Steinitz said that a "demilitarized" Palestinian state was the "only possible solution" to the conflict.


"At the end of the day, we will have such a situation. It’s going to be difficult to achieve it - there are many obstacles in the way - but I think there is no other solution to the problem," said the minister, who is a member of the ruling Likud party.

Israel and the Palestinians are expected to resume peace negotiations in Washington next week. 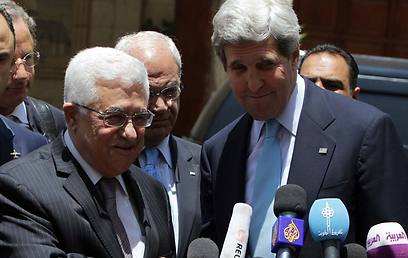 The minister said the Palestinians will also have to abandon the "right of return" for Palestinian refugees who were left Israel during the war of 1948. As for Jerusalem, which the Palestinians claim as their capital, Steinitz said the status quo was the only option.

"We are ready for a two states for two people solution," he said. "If we reach an end of conflict peace agreement with the Palestinians, we will have a referendum. I can tell you, I am confident that most Israelis will support it - even if we will have to make considerable and difficult concessions, including territorial concessions. But on one condition: that Israelis will be totally convinced that what we are getting in return is genuine, enduring peace and real security."

Addressing Iran's nuclear ambitions, Steinitz told The Telegraph that President-Elect Hassan Rohani had "cheated" the West when he led negotiations over the nuclear program a decade ago. While making paper concessions, Iran pressed on with developing its nuclear facilities.

"He (Rohani) is cunning, he's charming and he will smile all the way to the (nuclear) bomb unless the Western world will do everything necessary to stop him," said the minister.