Haredi man arrested after hurling stink bomb at marchers; parade to end with rally near Knesset

Over 3,000 people marched Thursday in Jerusalem's Gay Pride Parade, held under the the slogan "We want change," hoisting signs and LGBT flags.

During the parade, a haredi man lobbed a stink-bomb toward participants. The man was arrested and taken for an interrogation.

In addition, two haredi women, wearing a donkey and an ape costume and carrying a sign reading "I'm a proud donkey," were also arrested after clashing with the marchers. 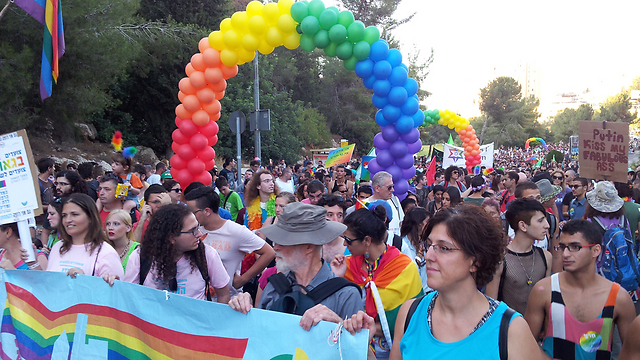 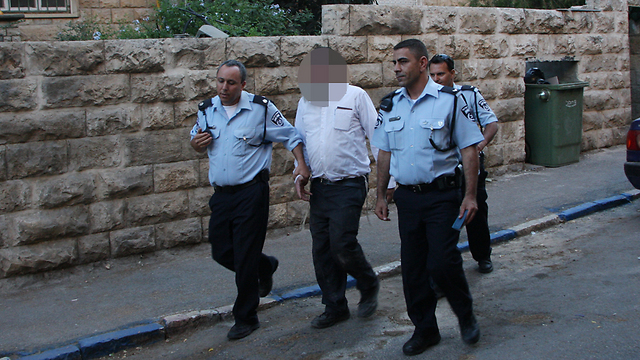 One of those arrested (Photo: Liran Tamari)

The parade's organizers demand MKs to promote pro-LGBT rights legislation. Hundreds of police and Border Guard officers accompany the parade, which will end at a rally near the Knesset.

"Every year has its provocations. This parade is a great celebration, and we're not concerned and will keep marching," said Oren First, 27, a participant in the parade, adding "The thousands marching here prove that we have a strong community which has made a long way in keeping its rights. The hate we witness shows we have still have some way to go."

Elinor Sidi, executive director of the Jerusalem Open House of Pride and Tolerance, added that "among the myriad of rights and freedoms the LGBT community enjoys, only a few were passed by the Knesset and the overwhelming majority of them were enacted through the High Court of Justice and other courts.

"Pro-LGBT legislation is still rare. The elected officials refuse to address the issue of equality and let the High Court do their job for them."

Sidi added that the Knesset's commitment to the cause "is based on legislation, not talk. We in the LGBT community have had enough of talk and promises."