Laszlo Csatary, a former police officer indicted in June by Hungarian authorities for abusing Jews and contributing to their deportation to Nazi death camps during World War II, has died. He was 98.

His lawyer, Gabor Horvath B., said Csatary died Saturday of pneumonia in a Budapest hospital.

Hungarian authorities have said Csatary was the chief of an internment camp for Jews in Kosice - a Slovak city then part of Hungary - in 1944, beating them with his bare hands and a dog whip. He had also been charged with assisting in the deportation of thousands of Jews to Auschwitz and other Nazi death camps. He denied all those charges.

Csatary was sentenced to death in absentia in Czechoslovakia in 1948 for similar war crimes. Last month, a Budapest court suspended the case against Csatary because of double jeopardy, as the charges filed by Hungarian prosecutors were similar to those in his 1948 conviction. Hungarian prosecutors appealed the decision and a ruling was pending. 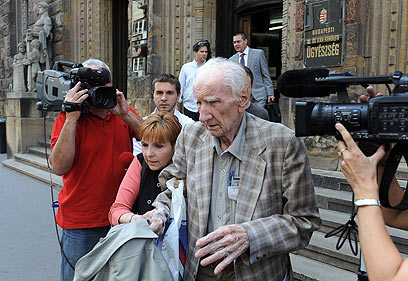 Slovakia recently changed the 1948 conviction to life in prison - the death sentence is banned in the European Union -- and was considering an extradition request for Csatary.

Csatary's case and his whereabouts were revealed in 2012 by the Simon Wiesenthal Center, a Jewish organization active in hunting down Nazis who have yet to be brought to justice.

In 1949, Csatary arrived in the Canadian province of Nova Scotia, became a Canadian citizen in 1955 and worked as an art dealer in Montreal. He left Canada in 1997 after it was discovered that he had lied about his Nazi-era past to obtain citizenship and authorities were close to deciding his fate in a deportation hearing.

Efraim Zuroff, director of the Simon Wiesenthal Center's Jerusalem office, said they were "deeply disappointed" in Csatary's death ahead of his possible trial in Hungary, where he had lived since leaving Canada, and said the case cast doubts on Hungary's commitment to punishing war criminals.

"It is a shame that Csatary, a convicted ... and totally unrepentant Holocaust perpetrator who was finally indicted in his homeland for his crimes, ultimately eluded justice and punishment at the very last minute," Zuroff said in a statement.

Csatary was born March 4, 1915, in the central Hungarian village of Many.