'There will never be peace here – trust me,' says Old City resident as Israel –PA negotiations set to resume. Jewish settler: They don’t want peace. We already tried everything

In the oppressive heat of a Jerusalem afternoon, neither Israelis nor Palestinians could summon much enthusiasm for the peace talks that are set to resume on Wednesday for the first time in three years. Each side believes the other is not serious about peace and almost nobody thinks there will be any real progress.

“There will never be peace here – trust me,” Hani Keri, a Palestinian who lives in Jerusalem’s Old City told The Media Line. “In 1948 (when Israel was created), my father said, ‘tomorrow will be OK’ and we’re still waiting. Nobody wants to make peace. Israel takes money from the Americans in the name of security. If there was peace, they wouldn’t have any reason to do that.”

A few blocks away at the crowded outdoor Mamilla mall, Nomi Magency agrees that peace is unlikely but she blames the Palestinians. Magency lives in a Jewish community built on land Israel acquired in 1967 and has come to Jerusalem to take her four young children to a new park with fountains built in memory of long-time Jerusalem mayor, Teddy Kollek.

“They don’t want peace,” she told The Media Line. “We already tried everything. Every time we negotiate with them they just want more and more. They want us out of here and not alive.” 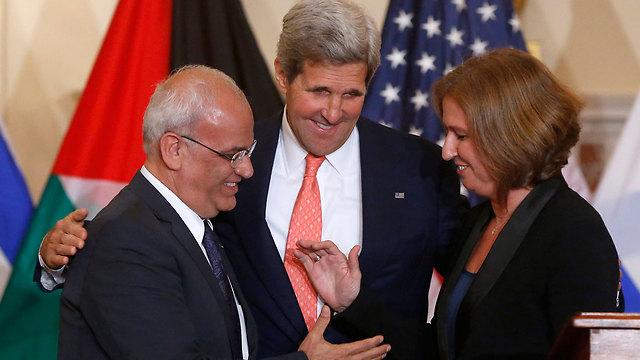 Magency recalls Israel’s 2005 unilateral withdrawal from the Gaza Strip. Afterwards, the Islamist Hamas movement took control of Gaza and fired thousands of rockets from there into southern Israel.

At Jerusalem’s Jaffa Gate, Zaki Sabah is selling long sesame-dusted breads as he has done for decades. Sabah became a celebrity in Israel recently when he was sentenced to 10 years in jail for unpaid fines for selling without a license. After public pressure, he was released, although he said he still has to pay the fine.

“I love peace – everybody loves peace -- but let’s wait and see,” he told The Media Line. “Yesterday the Israeli government announced they want to build 1,000 new houses in the ‘West Bank’. We have to sit seriously and talk, or there will be never-ending violence here.”

The peace talks are set to restart after almost three years in which there were almost no official contacts. The Obama administration has pushed hard for these talks, with Secretary of State John Kerry racking up frequent flyer miles trying to convince both sides to return to the table. A recent poll by the Israel Democracy Institute and Tel Aviv University found that 79% of Jewish Israelis think the negotiations have little chance of yielding a peace agreement. Arab citizens of Israel were more optimistic with 47% saying there is a good chance for a peace deal. Almost two-thirds of Israeli Jews and more than half of Arab citizens of Israel believe the Israeli government is truly interested in returning to the peace table. Less than one-third of Israeli Jews believe the Palestinian Authority is similarly interested. Israelis are also skeptical because of the ongoing political feud between Hamas, which rules the Gaza Strip, and Fatah, which governs the West Bank. Even if Israel is able to reach an agreement with Palestinian Authority President Mahmoud Abbas, they say there is no guarantee that Hamas will honor it. Palestinian officials say that like Israel, they have agreed to hold a referendum on any peace deal and to see the results as binding. In advance of the talks, Israel agreed to release 104 long-term Palestinian prisoners who have killed or seriously wounded Israelis. That provoked anger among many citizens who saw it as giving the Palestinians a prize for terrorism. “We’re letting 26 murderers out of prison and they want more, it’s ridiculous,” Howie Lebow, a visitor from Chicago told The Media Line. “They won’t be happy until they get every piece of this land.” Lebow has a daughter and grandson living in Israel and visits three times a year. He points out Israel’s significant economic achievements but is skeptical about the chances for peace. “If you walk around the streets of Jerusalem and Tel Aviv, Arabs and Muslims walk around the streets freely,” Lebow said. “There won’t be peace until the Arabs realize how good they have it here to compared to other Arab countries.” Polls on both sides have consistently indicated that a two-thirds majority support an agreement based on an Israeli withdrawal from most post-1967 land. The outlines of a deal are well-known and follow what are called the “Clinton parameters,” guidelines for a permanent status agreement presented by President Bill Clinton in 2000 after negotiations foundered. “We could make peace yesterday, today or tomorrow if we really wanted to,” Palestinian Hani Keri said. “How many meetings have we had? How many millions of dollars have been sent? It’s all for nothing.” Even those Israelis who support a Palestinian state have little hope that these talks will produce a breakthrough. “I want to see the leaders meeting and talking and then maybe I’ll get optimistic,” Israeli Aya Porat told The Media Line. “I support a Palestinian state but it’s much more complicated than just saying it. Sadly, I don’t think that the Palestinians are serious enough about making peace.