President Shimon Peres said in a meeting with UN Secretary General Ban Ki-moon Friday that he was surprised to learn that the Lebanese president had blamed Israel for Thursday's Beirut bombing.

On Thursday, Michel Suleiman condemned the explosion in the Dahiyeh quarter saying it had the fingerprints of Israel, and its purpose was to destabilize Lebanon.

Lebanon's interior minister said Friday the death toll from the powerful car bomb that struck a south Beirut suburb has risen to 22.

Marwan Charbel also says that officials are conducting DNA tests on Friday on body parts discovered near the vehicle that blew up to try to determine whether the explosion was the work of a suicide bomber.

Referring to instability in the Middle East, Peres said that "Bloodshed must be stopped. Israel is not involved and I won't address specifics."

Addressing the peace talks between Israel and the Palestinians he said that Europe and the rest of the international community should not put obstacles in the way of the negotiations, remarking that "there are enough problems." 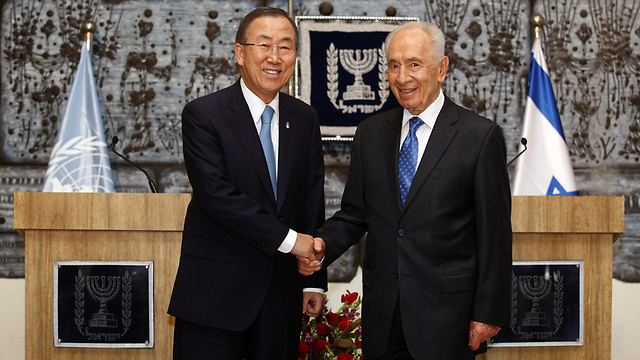 The president told Ban that he "came at the right time for the right cause" and that his presence was important in convincing leaders on both sides to continue negotiations. Peres noted that restarting the talks was not easy but that despite difficulty and pessimism Israel must proceed with the negotiations.

He said that both Prime Minister Benjamin Netanyahu and Palestinian President Mahmoud Abbas should be credited for making the decision to restart negotiations. "None of them can give their people all that they want but they both know what the people need," he remarked.

He described the first meeting that took place earlier as "not bad."

Referring to the situation in Syria, Peres told Ban he was glad to hear that the UN had sent inspectors to check for use of chemical weapons, which he said were in danger of falling into al-Qaeda 's hands.

He further noted that Iran continues to work towards obtaining a nuclear weapon and supporting two terrorist organizations – Hezbollah and Hamas .

The UN chief said negotiations were the best way to move forward and noted that the fact that the talks remain confidential shows that the sides are serious. He called on both sides to avoid actions that would jeopardize the talks remarking that the people need to see an economic improvement.

Ban further noted that while the situation in Syria and Egypt remains volatile Israel cannot live in fear adding that Israel has much to contribute to the region but that peace requires leadership and compromise.