Parents of children residing in northern and central Israel who were born after January 1, 2004 were called on Sunday morning to join a nationwide campaign of vaccinations against polio.

Vaccinations have been administered in southern Israel for the past two weeks in the form of a live and weakened vaccine against the deadly virus. The vaccinations will take place in Health Ministry's Tipat Halav baby clinics, as well health care clinics in Tel Aviv and Jerusalem. The medical centers' operating hours were extended in order to meet local needs of residents.

So far, more than 50,000 children residing in southern Israel have been vaccinated.

"It is very important to vaccinate. It should be understood what this virus is, how it spreads and how to develop antibodies in order for children not to release it in their feces and infect others," said Dorit Ben Nachum, a nurse in Tipat Halav baby clinic in central city of Lod. "The public here is very much aware of the importance of vaccinations and always comes when it is called, and very early on Sunday morning we already had a lot of people here." 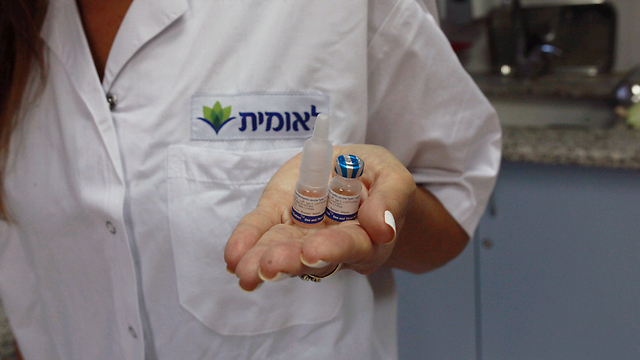 Speaking to Ynet, Health Minister Yael German addressed the issue of potential harm in the vaccine and said that "as the health minister, who gravely contemplated about the issue and consulted with many doctors and professionals, I am convinced beyond any doubt that whoever carries the inactivated vaccine is safe when receiving the vaccine through drops.

"We know this due to worldwide experience as well as experience in Israel. Since 1990 to 2004 we gave the inactivated vaccine as well as the live-weakened one. Six million doses were given in that period of time and not a single case of the disease was found, and that is why we do not fear it will happen this time." The polio virus was detected in sewage systems in southern Israel a few months ago, and since then the Health Ministry have been vaccinating children from the area using dead virus which prevent infection, but allow carriage of the virus.

About a month ago, it became clear that the virus is spreading and it was found in central Israel. Following consultations with professional sources and the World Health Organization, it was decided to launch a nationwide campaign of vaccinations.