Syrian state television said troops found chemical agents in rebel tunnels in a Damascus suburb on Saturday and some soldiers were "suffocating", intensifying a dispute over blame for a reported nerve gas attack that killed hundreds this week. The top UN disarmament official arrived in Damascus on Saturday to seek access for inspectors to the site of the attack and the United States was realigning naval forces in the region to give President Barack Obama the option for an armed strike on Syria.

Syria 's opposition accounts that between 500 and well over 1,000 civilians were killed by gas in munitions fired by forces loyal to President Bashar Assad, and video footage of victims' bodies, have heightened calls in the West for a robust, U.S.-led response after 2-1/2 years of international inaction on Syria's conflict. In a clear attempt to strengthen the government's denials of responsibility for the suspected chemical assault, Syrian state television said soldiers came across chemical agents in rebel tunnels in the suburb of Jobar and some were overcome by fumes. "Army heroes are entering the tunnels of the terrorists and saw chemical agents," it quoted a "news source" as saying. "In some cases, soldiers are suffocating while entering Jobar. Ambulances came to rescue the people suffocating in Jobar." An army unit was preparing to storm the insurgent-held suburb, the television added. Syrian opposition activists accuse Assad's forces of firing nerve gas projectiles into Jobar and other rebellious suburbs before dawn on Wednesday. Later in the week, activists crossed front lines around Damascus to smuggle out tissue samples from victims of the attack. The alleged chemical massacre did not even spare animals. In new images emerging from the Damascus suburb, opposition forces can be seen in gas masks walking down the street of the area surrounded by dead dogs, cats, sheep, goats and additional wildlife – all who supposedly died as a result of the chemical attack. 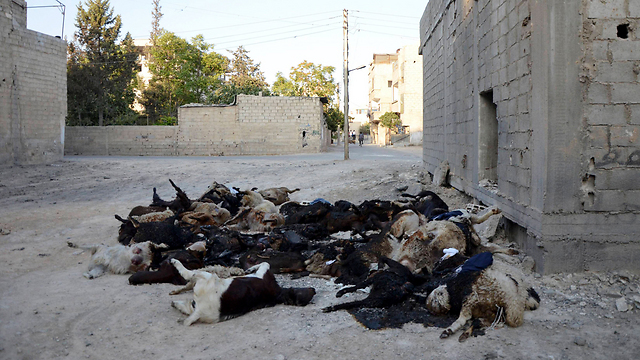 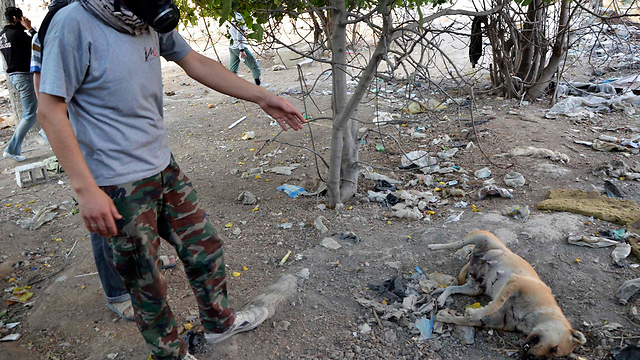 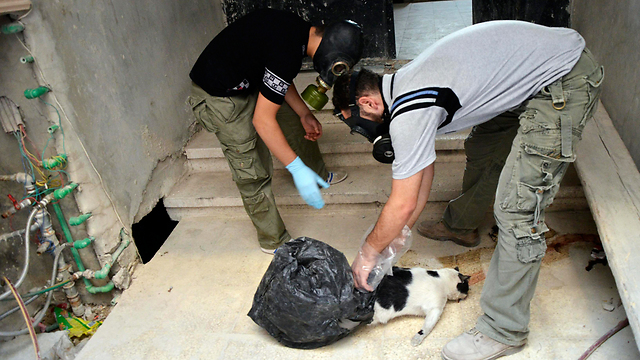 The report came amid news that US President Barack Obama has convened has national security team to discuss a possible response. It was also reported that Jordan has invited the army commanders of both Western and Arab nations to a meeting to discuss Syria's fallout. Earlier it was reported that the US is re-position its destroyers possibly in anticipation of an American decision to intervene.

Iran, the chief regional ally of Damascus, said on Saturday there is "proof" Syrian rebels used chemical weapons in their conflict with the regime of President Bashar Assad.

"We are very concerned about information regarding the use of chemical weapons in Syria, and we strongly condemn the use of such weapons," foreign ministry spokesperson Abbas Araqchi said, quoted by ISNA news agency.

"There is proof terrorist groups carried out this action," Araqchi said in reference to Wednesday's allegedly deadly attacks in the Damascus area, without elaborating.

Iran also warned against any Western military intervention in the 29-month conflict, after the United States suggested it was weighing up such a possibility.

Also on Saturday, French Foreign Minister Laurent Fabius said that all indications show that Syria's government was behind a "chemical massacre" near Damascus, in stanch contradiction to Iran's claims.

"All the information at our disposal converges to indicate that there was a chemical massacre near Damascus and that the Bashar regime is responsible," Fabius said on a visit to Ramallah in the West Bank. UN Under Secretary General Angela Kane arrived in the Syrian capital on Saturday for talks aimed at establishing the terms of an enquiry into the alleged attacks, an AFP journalist said. "We ask that the UN team that is there can be deployed very quickly and make the necessary inspections," Fabius said. Reuters and AFP contributed to this report