Home Front Command ABC kits distribution venues have been reporting increased turnout. A Tel Aviv venue which serves some 10 people daily on average served hundreds on Tuesday, according to estimates.

Though the Home Front Command has yet to issue new instructions, distribution venues nationwide have bolstered staff to keep up with the turnout.

Some 40% of the population are still without ABC kits, though State Comptroller's report warned against lack of preparedness. 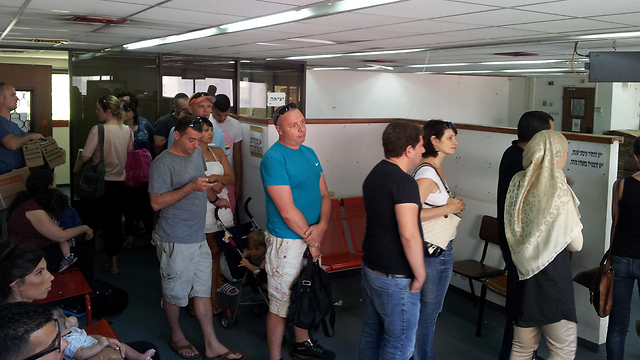 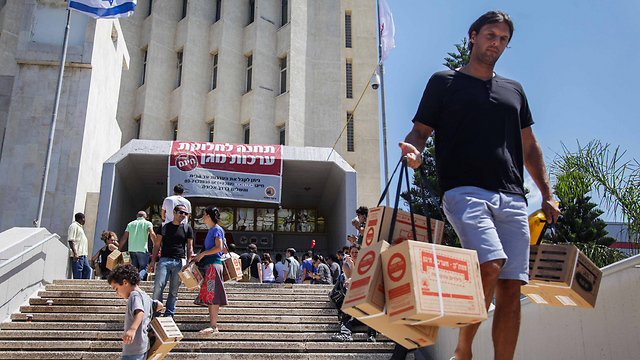 Dozens of Tel Aviv residents who arrived at the Tel Aviv venue discussed their concerns in light of a possible chemical attack and an international intervention in Syria.

"Striking Israel is inevitable," said Eyal, who was waiting in line for over an hour. "If the US attacks, they will definitely fire at us."

"I'd like to stay optimistic," said Hadas from Tel Aviv, who arrived with her 3-year-old son. "They say war is upon us and I'll do everything I can to keep my children safe."

"Though the risk is low, it still seems more probable than before," said Zohar from Zichron Yaacov who arrive at the Haifa venue. "The Americans are going to attack and we already know that Assad has chemical weapons, so why take the risk?"

When you hear an alert or an explosion you must stop the protection process, depending on how much time you have, and take the following action:

Inside a building – get into a Mamad (secure room in a private home), Mamak (secure room in a multistory building), shelter, or secure inside room, depending on how much time you have, and close the door and windows.

Tenants on the top floor of a building with more than three floors, who don't have an available Mamad, Mamak, shelter, or inside room, should go down two floors.

Tenants on the top floor of a three-story building, who don't have an available Mamad, Mamak, shelter, or inside room, should go down one floor.

Residents must not gather in the building entrance, because of the danger of injury from flying shrapnel or shock wave if a rocket should fall close to the building.

If no other directive is issued, you may leave the secure space ten minutes after the alert has been sounded.

It is important that you stay away from unidentified objects or any rocket lying on the ground. In such a case, keep curious bystanders away and notify the police.

Continue to listen for instructions broadcast on the media.

People in mobile homes or other temporary structures – when you hear an alert or an explosion, lie on the floor inside the building and wait ten minutes.

Outside – get into whatever nearby building you can, depending on how much time you have. If there is no building nearby, or if you are in an open area, lie on the ground and cover your head with your hands.

When you hear an alert while traveling in a bus, the driver must stop the bus and open the doors. The passengers must bend down below the bottom of the windows and cover their heads with their hands.

When you hear an alert while traveling on the train, the engine driver must slow the train to 30 kilometers an hour for ten minutes. Passengers must bend down below the bottom of the windows.

Ahiya Raved and Yoav Zitun contributed to this report