Woman who abandoned baby in J'lem - single mom from the terriroties

Mother of newborn baby found in capital is 30-year-old from Palestinian territories. Police: Abandoned child who was born out of wedlock

Police have managed to trace the mother of the newborn baby who was abandoned at an entrance to a residential building in Jerusalem on Saturday. The mother, a 30-year-old single woman from the territories, fled from her family after discovering she became pregnant out of wedlock.

The two-day-old girl was found in front of a residential building in Jerusalem with a note saying, "This is my baby, Osana, please take care of her." The umbilical cord was still attached to the child's body. After a lengthy investigation, police managed to trace the mother, contacted her, and after a negotiation convinced her to arrive to a Jerusalem checkpoint.

From there, the mother was transferred for further investigation. In the past few days welfare services have placed the baby in a foster home. 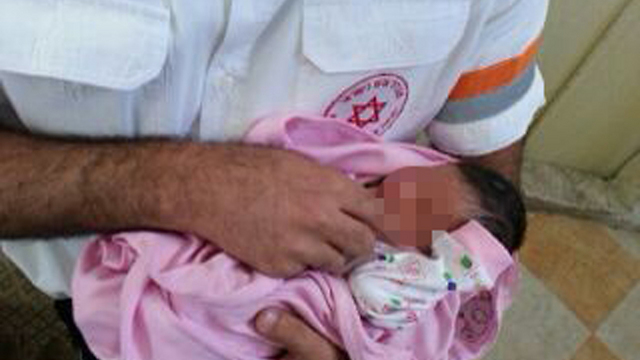 The investigation has found that the mother is a 30-year-old single Palestinian woman, who apparently abandoned the child, who was born out of wedlock, for fear for her and the child's life.

She fled from her family and moved between different locations in the territories to keep from being discovered.

Following the investigation, the mother will undergo medical tests. The police plan to consult the prosecution regarding the measures against the mother. The baby is not an Israeli citizen, and so authorities will have to look into the issue of her staying in the country.