Britain's government published internal legal advice it had been given on Thursday which it said showed it was legally entitled to take military action against Syria even if the United Nations Security Council blocked such action.

It also published intelligence material on last week's chemical weapons attack in Syria, saying there was no doubt that such an attack had taken place, that it was "highly likely" that the Syrian government had been behind it, and that there was "some" intelligence to suggest that was the case.

According to the legal document, the legal basis for military action would be humanitarian intervention; "the aim is to relieve humanitarian suffering by deterring or disrupting the further use of chemical weapons."

It was further stated that the UK is seeking a United Nations resolution that would "authorize member states, among other things, to take all necessary measures to protect civilians in Syria from the use of chemical weapons and prevent any future use of Syria’s stockpile of chemical weapons."

"If action in the Security Council is blocked, the UK would still be permitted under international law to take exceptional measures in order to alleviate the scale of the overwhelming humanitarian catastrophe in Syria by deterring and disrupting the further use of chemical weapons by the Syrian regime." 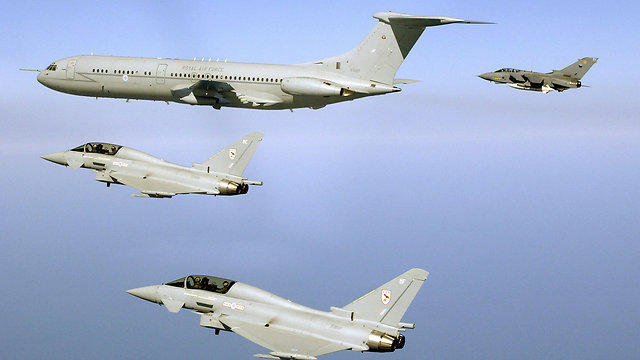 A letter from the chairman of Britain's Joint Intelligence Committee said there were "no plausible alternative scenarios" except that forces loyal to President Bashar Assad had perpetrated the chemical attack in the suburbs of Damascus.

"We also have a limited but growing body of intelligence which supports the judgement that the regime was responsible for the attacks and that they were conducted to help clear the Opposition from strategic parts of Damascus," it said.

Earlier on Thursday, it was reported that Britain is sending six RAF Typhoon jets to Cyprus as a defensive measure. A spokesman for the Ministry of Defense said the air-to-air interceptor jets would be deployed to the British Akrotiri base in Cyprus on Thursday.

"This is purely a prudent and precautionary measure to ensure the protection of UK interests and the defense of our Sovereign Base Areas at a time of heightened tension in the wider region," the spokesman said.