Official who was briefed on peace talks says Palestinians oppose proposal, fear any temporary arrangement with Israel will become permanent

Israel has proposed leaving intact dozens of Jewish settlements and military bases in the West Bank as part of a package to establish a Palestinian state in provisional borders, a Palestinian official told The Associated Press on Wednesday, in the first detailed glimpse at recently relaunched peace talks.

The official said the proposal is unacceptable to the Palestinians, underscoring the tough road ahead as the sides try to reach an agreement ending decades of conflict.

The official spoke on condition of anonymity because Israel and the Palestinians have pledged to US Secretary of State John Kerry not to discuss the content of their talks with the media -- a pledge that has largely held up until now.

For their future state, the Palestinians seek the West Bank, east Jerusalem and Gaza Strip, territories captured by Israel in the 1967 Mideast war.

With Israeli Prime Minister Benjamin Netanyahu opposed to a return to the pre-1967 lines, the idea of a Palestinian state in temporary borders has gained appeal with the Israelis.

Such a deal could give the Palestinians independence, while leaving the thorniest issues, such as the fate of Jerusalem and the status of millions of Palestinian refugees and their descendants, to later negotiations. The Palestinians reject any notion of a provisional agreement, fearing that a temporary arrangement that falls short of their dreams will become permanent.

Talks resumed in late July after a nearly five-year break stemming largely from Israeli settlement construction. The Palestinians have objected to Israeli construction in the West Bank and east Jerusalem. The Palestinians say these settlements, now home to more than 500,000 Israelis, make it increasingly difficult to partition the land between two people. 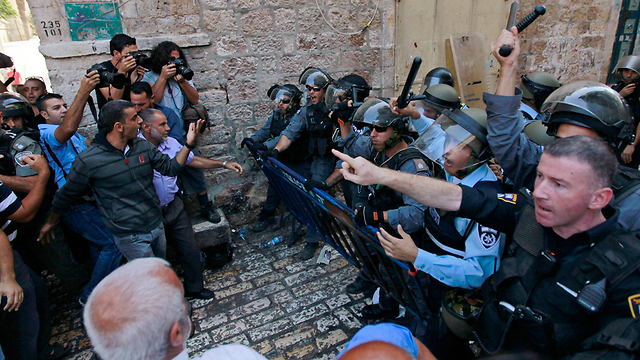 After months of US mediation, the Palestinians agreed to resume talks. Although Israel did not pledge to freeze settlement construction, US officials have said they expect both sides to avoid provocative moves. Negotiators have been quietly meeting once or twice a week for the past month or so.

The Palestinian official said formal talks on borders have not yet started, and that negotiations have focused on security matters. He said the Israelis want to retain control of the West Bank's border with Jordan, keep early-warning stations on hilltops, and retain military bases near the Jordanian border.

"Israel is using the issue of security to take land," he said. "From the general discussions we had in the last couple of weeks, the Israelis have shown no intention to dismantle any settlement." He said the current proposals indicated that Israel would seek to retain control over about 40% of the West Bank.

"They said, 'Let's discuss a state with provisional borders.' We said, 'Let's agree on a state based on the 1967 borders first, and then we can agree on having this state in phases."

'Not seeking a ceremony'

In the previous round of talks, conducted in 2008 under then-Prime Minister Ehud Olmert, Israel offered to withdraw from roughly 94 percent of the West Bank, and compensate the Palestinians with the equivalent of 6 percent through a "land swap" that would allow Israel to keep major settlements. Olmert also proposed international administration of Jerusalem's holy sites.

The official said the Palestinians have proposed resuming peace talks from the point they broke off. Netanyahu has said he is not obligated to accept Olmert's proposals.

A senior Israeli official refused comment on the Israeli proposal, citing the commitment to keep the talks secret.

"It was agreed between the sides that all public discussion about the negotiations would be through the Americans," the Israeli official said, speaking on condition of anonymity because he was not authorized to talk to the media about the issue.

Netanyahu's office declined comment, citing the pledge not to discuss the negotiations in public. Likewise, there was no immediate US comment.

In a statement released for the Jewish new year holiday that began Wednesday evening, Netanyahu said he hoped the talks would succeed.

"We seek to advance peace with the Palestinians while maintaining our security and ensuring that the peace will be a real and enduring peace. Not a ceremony, not an agreement that we celebrate for two minutes and then collapse," the statement said. "We want a real, genuine and enduring peace and this must be anchored in recognition of Israel as a Jewish state and in our security. This is what ultimately is needed."

Yasser Abed Rabbo, a top aide to Palestinian President Mahmoud Abbas, would not discuss the specifics of the talks. But speaking on the Voice of Palestine radio station, he said, "Until now, there are no signs of progress. The Israeli position has not changed. It's the one that we know on the ground, through daily settlement expansion."

He urged the US to put pressure on Israel. Otherwise, he said, "there will be no progress."

Police spokesman Micky Rosenfeld said the clashes erupted when about 300 Palestinians tried to block a group of visitors from reaching a sensitive hilltop compound revered by both Jews and Muslims. He says masked demonstrators began to throw stones, prompting security forces to move in.

He says some demonstrators sought refuge inside the nearby Al-Aqsa Mosque. Police did not enter the mosque, and no one was injured.

The compound, known to Jews as the Temple Mount, is the holiest site in Judaism. Known to Muslims as the "Noble Sanctuary," it is Islam's third-holiest site.

Rosenfeld said security has been heightened for the Jewish New Year holiday.