Hezbollah prepares for US strike; Russia lashes at rebels

Russia counters with its own chemical report, Hezbollah prepares for strike: Moscow accused the Syrian rebels of using chemical weapons in an attack on the town of Khan al-Assal near Aleppo on March 19. At the same time, Hezbollah is reportedly preparing for two tasks: Preventing Damascus from falling in rebel hands during expected US strike, and firing toward Israel.

The Saudi newspaper al-Okaz reported on Thursday that according to Lebanese sources in Beirut Hezbollah is readying for the collapse of the Syrian army following an American attack and is therefore planning to stand ground in Damascus with ten thousands combatants. 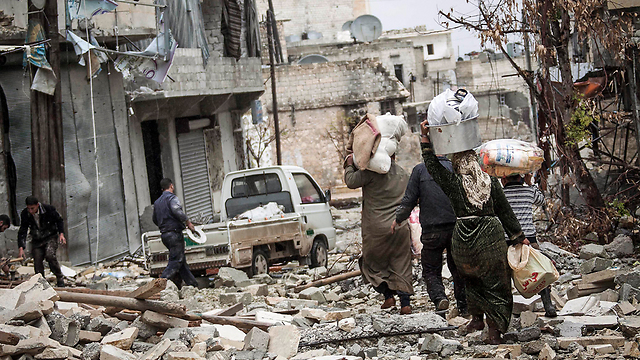 However, such a move – as well as firing missiles in the north of the country – will only be commenced with direct instructions from Iran, said the report.

Recently, the Shiite group has tuned down its involvement in the Syrian civil war due to the severe criticism turned against it at home. On Wednesday, it was reported that a top official in the group admitted that Assad is responsible for the chemical massacre in Damascus' suburbs.

Moscow, as said, is standing in staunch support of its ally Assad, and turns a blaming finger at the Syrian rebels.

The Russian RT network reported that Russian specialists claimed that the shells found were improvised, and conjectured they were manufactured in northern Syria by rebel forces.

According to them, the shells contained sarin nerve gas, classified by the UN as a weapon of mass destruction.

The Russian Foreign Ministry declared that probing the evidence may aid the UN investigate that incident in which at least 26 civilians and Syrian army soldiers were killed, and 86 more were injured.

Meanwhile, the Syrian President's Office political advisor, Bouthaina Shaaban, claimed that it was the Syrian opposition who perpetrated the August 21 chemical attack: "The opposition kidnapped men and children from villages in Latakia and brought them to the Gouta area near Damascus. There it used chemical weapons against them," she said in an interview for Sky news in Arabic.

Earlier this week, UN Chief Ban Ki-moon stated that the UN inspectors are expected to return to Syria in order to investigate additional attacked suspected to have involved chemical arms.

Meanwhile, the US Senate's Foreign Relations Committee voted on Wednesday to give President Barack Obama the authority to use military force against Syria in response to a deadly chemical attack in Damascus on August 21.

The Senate committee vote was 10-7, with one senator voting present. The full Senate is expected to vote on the measure next week.

Regarding the proposal for military action in Syria, President Obama stated on Wednesday during a press conference in Sweden: "I believe that Congress will approve it. I think it’s very important that Congress say that we mean what we say."

He stressed that "My credibility’s not on the line. The international community’s credibility is on the line, and America and Congress’ credibility is on the line because we give lip service to the notion that these international norms are important. And when those videos first broke and you saw images of over 400 children subjected to gas, everybody expressed outrage. How can this happen in this modern world? Well, it happened because a government chose to deploy these deadly weapons on civilian populations.

"And so the question is how credible is the international community when it says this is an international norm that has to be observed? The question is how credible is Congress when it passes a treaty saying we have to forbid the use of chemical weapons? And I do think that we have to act because if we don’t, we are effectively saying that even though we may condemn it and issue resolutions and so forth and so on, somebody who is not shamed by resolutions can continue to act with impunity."