Syria's Foreign Minister Walid al-Moallem said on Tuesday that "we are ready to show sites with chemical arsenals to Russia’s representatives, as well as representatives of other states and the UN." Meanwhile, even before US President Barack Obama's speech Tuesday night, the UN Security Council will convene to discuss the Syrian crisis.

Speaking to Lebanese Hezbollah-affiliated Al-Mayadeen channel, the Syrian foreign minister announced that his country intends on joining the international treaty for the nonproliferation of chemical weapons. "We are willing to respect our commitments in accordance with this covenant," he said.

Syrian Prime Minister Wael al-Halqi also expressed the support of the Syrian government in the Russian initiative for international control of the regime's chemical arsenal. "We support this (initiative) because the aim is to prevent Syrian bloodshed and prevent war, of which the consequences could spread far beyond the region," said al-Halqi. 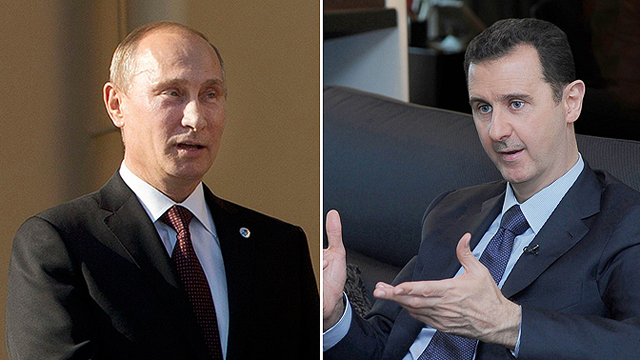 Syria's Ambassador to Lebanon Ali Abdul Karim said in regards to the Russian initiative on Tuesday that "we looked for a solution to the embarrassment the US administration put itself into."

Russian President Vladimir Putin, who is doing everything to prevent a US strike in Syria, addressed his country's proposal to inspect and monitor the Assad regime's chemical weapons on Tuesday. In a statement he made to Arabic-language channel Russia Al-Youm, Putin said that "we hope Syria will not suffice with heaving the chemical weapons under international supervision, but also agrees to destroy it."

Meanwhile, US Secretary of State John Kerry clarified on Tuesday that even though the US bears hope in the Russian initiative to transfer Syrian chemical arms for international control, the Obama administration will continue at this time to try and persuade the US Congress to allow the use of force against President Bashar Assad's regime.

In a hearing with the Armed Services Committee of the House of Representatives, Kerry said that the US still awaits a concrete and verifiable Russian plan to remove chemical weapons from Syria, but will not wait for long and will not accept any delaying tactics. He added that "we all hope" that the transfer of Assad's chemical weapons will be the solution to the crisis.