At Pentagon ceremony marking 12th anniversary of terror attacks on US, president says 'Let us have the courage to carry on no matter how dark the night'

As bells tolled solemnly, Americans marked the 12th anniversary of the Sept. 11 terrorist attacks on Wednesday with the reading of the names, moments of silence and serene music that have become tradition.

At a morning ceremony on the 2-year-old memorial plaza at the site of the World Trade Center, relatives recited the names of the nearly 3,000 people who died when hijacked jets crashed into the World Trade Center and the Pentagon and near Shanksville, Pa., as well as the 1993 trade center bombing victims' names.

In Washington, President Barak Obama, joined by first lady Michelle Obama, Vice President Joe Biden and wife Jill Biden and members of the White House staff, walked out to the South Lawn at 8:46 am — the moment the first plane struck the south tower in New York. At the site in lower Manhattan, friends and families silently held up photos of the deceased. Others wept.

"Daddy, I miss you so much, and I think about you every day," Christina Aceto said of her father, Richard Anthony Aceto. "You were more than just my daddy, you were my best friend."

Bells tolled to mark the second plane hitting the second tower, and the airliner that crashed into the Pentagon. Near the memorial plaza, police barricades were blocking access to the site, even as life around the World Trade Center looked like any other morning, with workers rushing to their jobs and construction cranes looming over the area.

"As time passes and our family grows, our children remind us of you," Angilic Casalduc said of her mother, Vivian Casalduc. "We miss you."

At the Pentagon, where American Airlines Flight 77 crashed at 9:37 am on September 11, Obama laid a wreath and then spoke at a private observance for family members of the 184 people who died there.

"Our hearts still ache for the futures snatched away," he said.

The president also praised military and diplomatic personnel who have made sacrifices over the past dozen years - and he singled out the four Americans who lost their lives a year ago during an attack on a US facility in Benghazi, Libya.

All Americans who resumed their lives after the horrors of 9/11 - especially those who lost loved ones -deserve credit for helping rebuild the nation, Obama said.

"Let us have the strength to face the threats that endure, different though they may be from 12 years ago, so that as long as there are those who would strike our citizens, we will stand vigilant and defend our nation," the president said after laying a wreath at the Sept. 11 memorial at the Pentagon.

"Let us have the wisdom to know that, while force is at times necessary, force alone cannot build the world we seek," he said.

Name-reading, wreath-laying and other tributes also will be held at the Pentagon and at the Flight 93 National Memorial in Shanksville while the commemoration unfolds at ground zero, where the mayor who has helped orchestrate the observances from their start watched for his last time in office. And saying nothing. 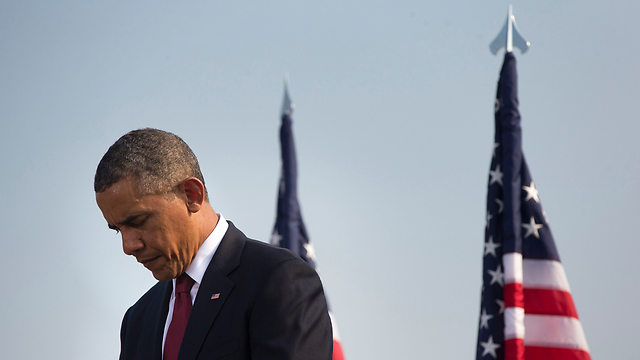 "No matter how many years pass, this time comes around each year — and it's always the same," said Karen Hinson of Seaford, N.Y., who lost her 34-year-old brother, Michael Wittenstein, a Cantor Fitzgerald employee.

"My brother was never found, so this is where he is for us," she said as she arrived for the ceremony with her family early Wednesday. Loved ones milled around the memorial site, making rubbings of names, putting flowers by the names of victims and weeping, arm-in-arm. Former Gov. George Pataki, New Jersey Gov. Chris Christie and others were in attendance. Continuing a decision made last year, no politicians will speak, including Mayor Michael Bloomberg.

Over his years as mayor and chairman of the National Sept. 11 Memorial & Museum, Bloomberg has sometimes tangled with victims' relatives, religious leaders and other elected officials over an event steeped in symbolism and emotion. But his administration has largely succeeded at its goal of keeping the commemoration centered on the attacks' victims and their families and relatively free of political image-making.

"Joe, we honor you today and all those lost on Sept. 11," said Kathleen O'Shea, whose nephew Joseph Gullickson was a firefighter in Brooklyn. "Everyone sends their love and asks that you continue to watch over us all, especially your wife." Memorial organizers expect to take primary responsibility for the ceremony next year and say they plan to continue concentrating the event on victims' loved ones, even as the forthcoming museum creates a new, broader framework for remembering 9/11.

"As things evolve in the future, the focus on the remembrance is going to stay sacrosanct," memorial President Joe Daniels said.

Hinson said she would like the annual ceremony to be "more low-key, more private" as the years go by.

The 12th anniversary also arrives with changes coming at the Flight 93 National Memorial in Shanksville, where officials gathered Tuesday to herald the start of construction on a visitor center. At the Pentagon, plans call for a morning ceremony for victims' relatives and survivors of the attacks and an afternoon observance for Pentagon workers.

Around the world, thousands of volunteers have pledged to do good deeds, honoring an anniversary that was designated a National Day of Service and Remembrance in 2009.

When Bloomberg and then-Gov. George Pataki announced the plans for the first anniversary in 2002, the mayor said the "intent is to have a day of observances that are simple and powerful."

His role hasn't always been comfortable. When the ceremony was shifted to nearby Zuccotti Park in 2007 because of rebuilding at the trade center site, some victims' relatives threatened to boycott the occasion.

The lead-up to the 10th anniversary brought pressure to invite more political figures and to include clergy in the ceremony.

By next year's anniversary, Bloomberg will be out of office, and the museum is expected to be open beneath the memorial plaza.

While the memorial honors those killed, the museum is intended to present a broader picture of 9/11, including the experiences of survivors and first responders.

But the organizers expect they "will always keep the focus on the families on the anniversary," Daniels said. That focus was clear as relatives gathered last September on the tree-laden plaza, where a smaller crowd was gathering Wednesday — only friends and family of the victims were allowed.

"We grew up together on the Lower East Side and I come every year with her family," she said. "Coming here is peaceful in a way."

Denise Matuza, who lost her husband on Sept. 11, said people ask her why she still comes to the service with her three sons.

"It doesn't make us feel good to stay home," she said. Her husband called after the towers were struck. "He said a plane hit the building, they were finding their way out, he'd be home in a little while. I just waited and waited," she said.

"A few days later I found an email he had sent that they couldn't get out."