Meanwhile, State Department spokesman Jen Psaki said Kerry will travel to Jerusalem on Sunday to hold talks with Prime Minister Benjamin Netanyahu on the progress made in the Middle East peace talks and Syria.

The two men will discuss "the final status negotiations between the Israelis and Palestinians, following on the secretary's meeting with Palestinian President Mahmoud Abbas in London last Monday," he said.

After meeting the UN envoy on Syria in Geneva, where they are trying to confirm a Russian plan to remove Syria's chemical weapons and avert US military action, Lavrov and Kerry said they agreed to try and make progress on a broader effort to end a conflict that has divided the Middle East and world powers.

They would meet again in about two weeks, around Sept. 28 during the United Nations General Assembly in New York, and hoped progress in Geneva in the coming day on a chemical weapons disarmament deal would help revive plans for peace conference.

"We are committed to trying to work together, beginning with this initiative on the chemical weapons, in hopes that those efforts could pay off and bring peace and stability to a war-torn part of the world," Kerry told a joint news briefing.

The top US diplomat said after the hour-long meeting at the UN in Geneva that the chances for a second peace conference in Geneva "will obviously depend on the capacity to have success here ... on the subject of the chemical weapons."

Kerry cautioned after meeting Lavrov on Thursday that the United States could still carry out a threat to attack President Bashar al-Assad in retaliation for a poison gas attack last month if Washington was not satisfied with Syria's response.

UN special envoy Lakhdar Brahimi, who also represents the Arab League, said working to remove chemical weapons from Syria would form an important element in efforts to hold new peace talks, following an earlier failed attempt at Geneva last year. As the diplomacy continued in Switzerland, Assad's forces were on the offensive against rebel-held suburbs of Damascus, opposition activists and residents said. Warplanes and artillery were bombing and shelling, notably in the Barzeh neighborhood, where activists said there were also clashes on the ground. "It seems that the government is back to its old routine after the past couple of weeks of taking a defensive posture from a US strike," said one resident of central Damascus, who opposes Assad. She heard jets overhead and artillery in action.

Damascus formally applied to join a global poison gas ban - a move welcomed on Friday by Russian President Vladimir Putin. He called it "an important step towards the resolution of the Syrian crisis" and added: "This confirms the serious intention of our Syrian partners to follow this path."

China, too, hailed Assad's decision, as did Iran, Assad's key ally in a regional confrontation with sectarian overtones between Shiite Tehran and Sunni Muslim Arab states. But Kerry has underscored that Washington could still attack: "This is not a game," he said on Thursday. The talks were part of a diplomatic push that prompted President Barack Obama to put on hold his plans for US air strikes in response to a chemical weapons attack on Aug. 21. Moscow's proposal also spared Obama facing a vote in Congress on military action that he appeared likely to lose at this stage. 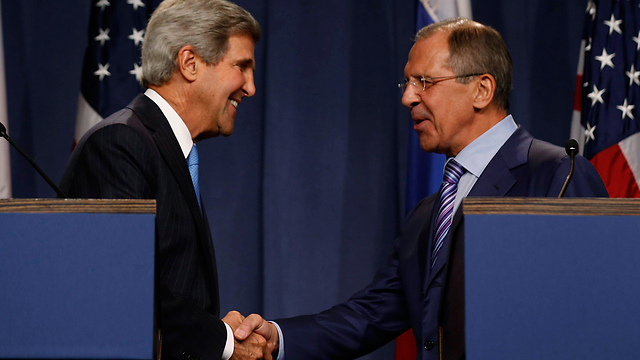 The United States and its allies say Assad's forces carried out the attack with sarin nerve gas, killing more than 1,400 people. Putin and Assad have blamed rebel forces.

The United Nations said it received a document from Syria on joining the global anti-chemical weapons treaty, a move Assad promised as part of a deal to avoid US air strikes. Assad told Russian state television in an interview broadcast on Thursday that he would finalize plans to abandon his chemical arsenal only when the United States stops threatening to attack him. Lavrov said on Thursday: "We proceed from the fact that the solution of this problem will make unnecessary any strike on the Syrian Arab Republic." Along with other world powers, Moscow and Washington see the instability in Syria as fuelling wider security threats, but differ sharply on how to respond. Western powers say that Assad is a tyrant who should be overthrown. Russia, like Assad, highlights the presence in rebel ranks of Islamist militants. In an audio recording released a day after the 12th anniversary of the Sept. 11 attacks, al-Qaeda leader Ayman al-Zawahri referred to Islamist fighters in Syria among other battlegrounds as he urged supporters to carry out attacks in the United States to "bleed America economically." Putin's Russia has been Assad's most powerful backer during the civil war, which has killed more than 100,000 people since 2011, delivering arms and - with China - blocking three UN resolutions meant to pressure Assad. Kerry said any agreement must be comprehensive, verifiable, credible and implemented in a "timely" way - "and finally, there ought to be consequences if it doesn't take place." Kerry called a peaceful resolution "clearly preferable" to military action. Assad told Russian TV: "When we see the United States really wants stability in our region and stops threatening, striving to attack, and also ceases arms deliveries to terrorists, then we will believe that the necessary processes can be finalized."

Assad said Syria would provide an accounting of chemical weapons stocks in 30 days, standard practice under the treaty.