In interview with '60 Minutes,' American president says international community must enforce WMD disarmament plan. This may be a first step in what potentially could be an end to terrible bloodshed,' he says

WASHINGTON – Addressing the US-Russian agreement to disarm Syria of its chemical weapons, President Barack Obama told CBS's "60 Minutes" it is important to "make sure that the international community has confidence that these chemical weapons are under control, that they are not being used, that potentially they are removed from Syria and that they are destroyed."

During the interview, aired early Monday morning (Israel time), Obama said "there are a lot of stockpiles inside of Syria. It's one of the largest in the world. Let's see if they're serious. But we have to make sure that we can verify it and enforce it and if in fact we're able to achieve that kind of agreement that has Russia's agreement and the Security Council's agreement, then my central concern in this whole episode is result.

"It doesn't resolve the underlying terrible conflict in Syria. And that I've always said is not amenable to a military solution. We're going to have to get the parties to arrive at some sort of settlement. But this may be a first step in what potentially could be an end to terrible bloodshed and millions of refugees throughout the region that is of deep concern to us and our allies," the American leader said.

Obama further told "60 Minutes" that "it is very important for Congress and the American people to recognize that we would not be getting even ticklers like this if it weren't for the fact that we were serious about potentially taking action in the absence of some sort of movement. It's in part humanitarian. Any parent who sees those videos of those children being gassed I think understands what a human tragedy it is." 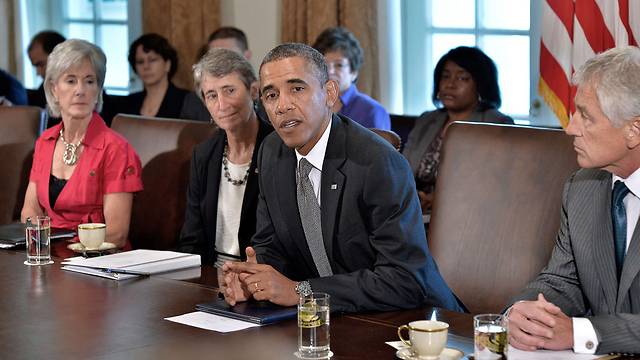 Meanwhile, officials said UN leaders have "agonized" over a report that Secretary-General Ban Ki-moon will present Monday on chemical weapons in Syria that could renew pressure on President Bashar Assad.

Ban will present the report to the UN Security Council at 11:15 am (1515 GMT). He has already revealed that he expects the report by a UN investigation team to give "overwhelming" confirmation that arms were used in an attack near Damascus on August 21 in which hundreds died.

On Sunday Obama compared his policy on Syria to policy on Iran. In an interview with ABC, he said, "I think the new Iranian president will not make our job easier, but I think if you have a credible threat of force, along with strenuous diplomatic efforts ... it is possible to reach an agreement."

Obama confirmed for the first time in an interview that he had corresponded with Iranian President Hassan Rohani. The American president said he believed the US threat to attack Syria, plus the transition to a diplomatic solution in the form of the Russian initiative for chemical disarmament, signaled to the Tehran regime the reality of the potential threat over the dispute on Iran's nuclear program, and its possible solution.

"They shouldn't draw a lesson ... to think we won't strike Iran,” Obama explained, but also said, "There is the potential of resolving these issues diplomatically."

A few hours later, Iranian Foreign Minister Mohammad Javad Zarif said in an interview with Lebanese channel Al-Mayadeen, "We are suffering from lack of mutual trust with the US," but stressed that the Islamic Republic was willing to "build trust with the United States" on the issue of the Iranian nuclear program, which was "established for peaceful purposes."