The Miss America pageant has crowned its first winner of Indian heritage.

Moments after winning the 2014 crown, 24-year-old Nina Davuluri described how delighted she is that the nearly century-old pageant sees beauty and talent of all kinds.

"I'm so happy this organization has embraced diversity," she said in her first press conference after winning the crown in Atlantic City, New Jersey's Boardwalk Hall. "I'm thankful there are children watching at home who can finally relate to a new Miss America."

The native of Syracuse, New York wants to be a doctor, and is applying to medical school, with the help of a $50,000 scholarship she won as part of the pageant title.

She is the second consecutive Miss New York to win the Miss America crown, succeeding Mallory Hagan, who was selected in January when the pageant was still held in Las Vegas. The Miss America Organization will compensate Hagan for her shortened reign. 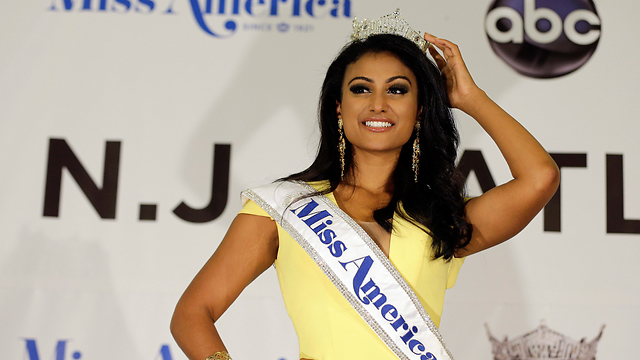 'I have to rise above that.' Davuluri (Photo: AP)

Davuluri's victory led to some negative comments on Twitter from users upset that someone of Indian heritage had won the pageant. She brushed those aside.

"I have to rise above that," she said. "I always viewed myself as first and foremost American."

Some of the Twitter comments: @NateBerard: Asian or indian are you kiddin this is america omg @sarawhitton: this is America. not India @savannah_dale97: Miss New York is an Indian.. With all do respect, this is America @LukeBrasili: 9/11 was 4 days ago and she gets miss America? @SHANN___Wow: Miss America right now or miss Al Qaeda? @JPLman95: Miss America? You mean Miss 7-11. @Blayne_MkItRain: Congratulations Al-Qaeda. Our Miss America is one of you. @Not_MissAmericaMore like Miss Terrorist #MissAmerica Her grandmother told The Associated Press that she cried when she saw the news on television. "I am very, very, happy for the girl. It was her dream and it was fulfilled," 89-year-old V. Koteshwaramma said by phone from her home in the city of Vijaywada, in the southern Indian state of Andhra Pradesh. Davuluri will still make the traditional frolic in the Atlantic City surf Monday morning. 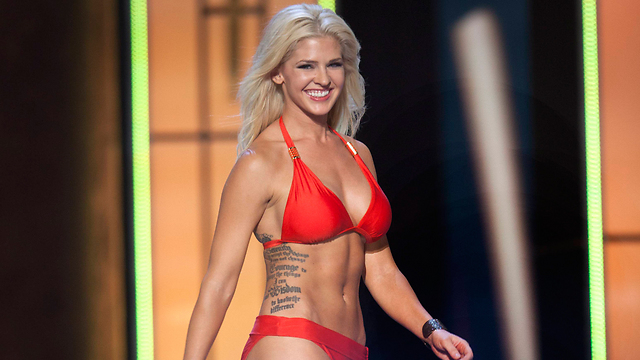 In the run-up to the pageant, much attention was given to Miss Kansas, Theresa Vail, the Army sergeant who was believed to have been the first Miss America contestant to openly display tattoos. She has the Serenity Prayer on her rib cage, and a smaller military insignia on the back of one shoulder.

Vail won a nationwide "America's Choice" vote to advance as a semi-finalist, but failed to make it into the Top 10.

In a Twitter message Sunday before the finals began, Vail wrote: "Win or not tonight, I have accomplished what I set out to do. I have empowered women. I have opened eyes."

Jones made it into the top 5 wearing a bedazzled knee brace. She tore knee ligaments Thursday while rehearsing her baton-twirling routine, which she executed flawlessly Sunday night.

The pageant had pitted 53 contestants - one from each state, plus Washington, DC, Puerto Rico and the US Virgin Islands - in swimsuit, evening gown, talent and interview competitions.