Lavrov on Syria: It's a chance for solution

After gaining the upper hand in the struggle over the final form of the UN Security Council's Syria resolution, Russian Foreign Minister Sergey Lavrov took the podium in the UN General Assembly in New York.

"This is the only chance for a solution," he declared, referring to the talks to disarm Syria from its chemical weapons, after meeting his US counterpart on Thursday and convincing him to withdraw the American clause which will allow for a military strike in Syria.

Lavrov also said that the West must not "accuse and condemn" the Syrian regime without formal proof in the case of chemical weapons. He claimed that investigations of chemical weapons in Syria are conducted "impartially" and the results reviewed by the Security Council "based solely on the facts" .

"The use of chemical weapons in Syria is unacceptable but it does not authorize anyone to assume the right to accuse and condemn," Lavrov said. He was referring implicitly to Western accusations against the Syrian regime in the massacre committed on August 21, near Damascus. Moscow has accused the Syrian opposition have mounted a challenge to accuse Damascus side.

Russia opposed a clause that will go into effect automatically should Syria reject the resolution and insisted that in this case, the subject of penalizing Syria will be reviewed again by the council.

In a press conference held by Lavrov and Kerry in which they announced the agreement to disarm Syria from chemical weapons, the Russian minister claimed that "any breach of the regulations will be tracked by the UNSC, and should it be approved – the council could take the necessary steps."

Conversely, Kerry claimed that any breach will be answered by sanctions – and did not mention the need for the UNSC's approval. 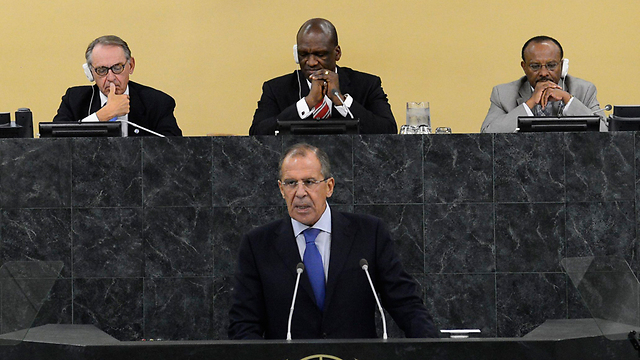 In an interview for the CBS network Kerry confirmed that the US indeed gave up the clause of automatic military action against Syria, to prevent a Russian veto. But he clarified that the US reserves the right to strike against Syria, should it not keep its obligation to give up its chemical weapons stockpiles.

Russia also announced lately that it would be willing to secure the Syrian sites related to the chemical weapons program while the stockpiles are destroyed.

Syrian President Bashar Assad commented this week on his country's tight cooperation with Russia and said: "Russia's President Vladimir Putin arrived at the G20 summit isolated, but came out an initiator. We aided him to weaken US President Barack Obama's stance, who did not want to attack Syria in the first place. He was hesitant, fearful, and he waited for a way out."

In an interview for the Hezbollah -affiliated al-Akhbar newspaper, Assad claimed that "the Russian fulfilled and are still fulfilling their duties in all respects. They did not neglect us and we have full Russian commitments according to which Russian forces will intervene in any war directed against Syria."