In Amsterdam, Israeli president says Anne Frank's voice 'will forever remind the world of the victory of the sons of light over the sons of darkness'

President Shimon Peres opened his official visit to Holland at the Anne Frank House in Amsterdam, where he chose to support Prime Minister Benjamin Netanyahu's tough stance against the international community's efforts to settle the Iranian and Syrian crises diplomatically. In his comments, the president alluded to a similarity between Syrian President Bashar Assad's government and the Nazi regime.

"I doubt whether Bashar Assad read the Diary of Anne Frank when he did not hesitate to use chemical weapons and murdered innocent children and women. (This is also true) for Iran, which develops nuclear weapons" Peres said. 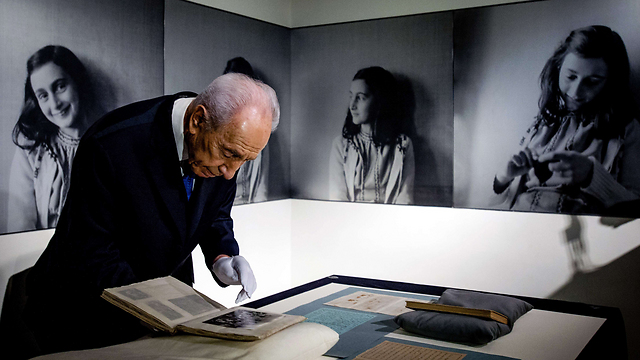 "I cannot refrain from addressing what is happening around us and say in a clear voice that Anne Frank's warning sign also stands before us today. Your voice, Anne, is the voice that rings in our ears and will forever remind the Jewish people and the entire world of the victory of the sons of light over the sons of darkness."

The Israeli president was shown photos collected by Anne Frank while she was hiding in the attic, as well as original pages from her diary and letters written by her father, Otto Frank, upon his release from Auschwitz.

The letters, written in German, were sent by Otto Frank to his mother in February 1945. They will be displayed at the Anne Frank House beginning next month.