'We are striving so hard to promote dignity among the living. And here we have our dead people ... vandalized,' caretaker of Protestant cemetery says

Christian leaders in Israel are up in arms over what they say is a string of relentless attacks on church properties and religious sites -- most recently the desecration of a historic Protestant cemetery where vandals toppled stone crosses from graves and bludgeoned them to pieces.

The attack in the Protestant Cemetery of Mount Zion, one of Jerusalem's most important historic graveyards, has struck a particularly sensitive nerve because some of the damaged graves belong to famous figures from the 19th and 20th centuries, a key period in Jerusalem's history. Among them are a German diplomat, the founder of an orphanage who was a significant contributor to modernizing the city, and a relative of the owners of a prominent hotel.

Though members of the clergy say interfaith relations between top religious leaders have never been stronger, and police have been more responsive to such attacks in recent years, they say attacks continue unabated. Some activists say not enough is being done to stop them. "We are striving so hard to promote dignity and respect among the living. And here we have our dead people ... vandalized," said the Very Rev. Hosam Naoum, caretaker of the Protestant cemetery. "No human would agree with this." Police arrested four young Israeli settlers from the West Bank last week, two of them minors, in connection with the cemetery attack, said police spokesman Micky Rosenfeld. But Rosenfeld said the four were subsequently released without charge until further questioning. Two of the suspects had been banned from entering the West Bank because of their connections to the "hilltop youth," a movement of young Jewish extremists blamed for a spate of attacks in recent years on mosques, Christian sites and Israeli army property to protest government policy. 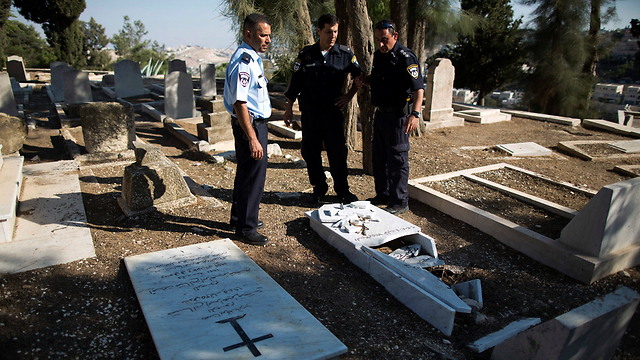 The four suspects claimed they had entered the cemetery to immerse themselves in a ritual bath there, according to media reports. Rosenfeld could not immediately confirm the reports, and the record of the court session was sealed because minors were involved.

Naoum said the reported alibi was suspect. An ancient Jewish ritual bath was excavated on the premises but it contains no water, and an old well nearby has a narrow opening and would be dangerous to enter, he said. Naoum said his staff saw religious Jewish youths breaking into the cemetery again on Tuesday and Wednesday, though no damage was reported. Israeli media have said two of the original suspects were students at a nearby Jewish seminary known for its ultranationalist views. Naoum said he is reporting the events to the German and British embassies, which have representatives on the cemetery administration board, as well as to the Archbishop of Canterbury. 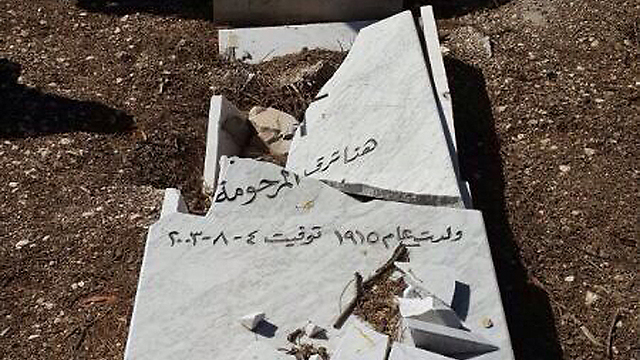 The attack joins a list of high-profile Christian sites that have been vandalized within the past year. They include a Trappist monastery in Latrun, outside Jerusalem, where vandals burned a door and spray-painted "Jesus is a monkey" on the century-old building, a Baptist church in Jerusalem, and other monasteries. Clergymen often speak of being spat at by ultra-Orthodox religious students while walking around Jerusalem's Old City wearing frocks and crosses.

Christian citizens of Israel, including Roman Catholic and Orthodox streams of Christianity, make up less than 2 percent of its nearly 8 million people. About three-quarters of them are Arabs, and the others arrived during a wave of immigration from former Soviet Union countries that began 20 years ago. Tens of thousands of Christian foreign workers and African migrants also live in Israel. The population figures include Christians in Israel and east Jerusalem, the section of the city captured by Israel in 1967 and claimed by the Palestinians. Over the past three years, 17 Christian sites in the Holy Land have been reported vandalized, according to Search for Common Ground, a nongovernmental group that monitors press reports of attacks on religious sites. Researcher Kevin Merkelz said a police detective in charge of Christian affairs told the organization the numbers are actually higher, but Christian leaders chose not to report many attacks to the press. "The Christians who are still here want to keep a low profile when attacked," said Merkelz. He said the group does not include sites in the politically sensitive Old City of Jerusalem in its survey, because many sites are in dispute and the group does not want to be seen as taking sides. Christian leaders are often afraid to complain to police because many clergymen reside in Israel on special visas and wish to keep good relations with authorities, said Hana Bendcowsky of the Jerusalem Center for Jewish-Christian Relations. "There is a very strong feeling that the police are not doing enough ... and not doing work to prevent the phenomenon," she said. Rosenfeld, the police spokesman, said Israeli police recently set up a task force to combat "nationalistic" motivated crimes, and last week arrested 14 youths in connection with attacks on Arabs. He said police are carrying out more patrols around holy sites and are considering installing security cameras to protect them. He also claimed the numbers of attacks against Christian sites remains relatively low. "There is more awareness that holy areas have to be watched closer and protected better," Rosenfeld said. The Rev. Pierbattista Pizzaballa, one of the Roman Catholic church's top officials in the Holy Land, said such attacks "have become routine and target not only Christians. They're conducted by extremists and go against the spirit of tolerance. But it's also true that they're strongly condemned by the Jewish community, by people opposed to them." Naoum, the cemetery caretaker, said a group of 150 Jewish religious figures will be paying a solidarity visit to the cemetery this week. In the oldest section of the Protestant Cemetery of Mount Zion, just outside the walls of Jerusalem's ancient Old City, the tops of large stone monuments, many written in German, were bare, and the stone crosses that used to top them lay broken into a few pieces. Graves damaged belong to a British Mandate policeman and important figureheads in the city. The most notable of them is Johann Ludwig Schneller, founder of an orphanage and the most advanced printing press in 19th century Jerusalem. Also damaged was the grave of Edmund Schmidt, the German consul general at the beginning of the 20th century. The grave of Ferdinand Vester, who built the house where a branch of the US Consulate General to Jerusalem is located today and who was related to the founders of the storied American Colony Hotel, was also damaged. The cemetery is "a microcosm of Jerusalem history from the 1830s till the present," said Amnon Ramon, an expert on Christianity at the Jerusalem Institute for Israel Studies. Curiously, it is not the first time the Protestant cemetery has been attacked. About 100 years ago, the American consul to Jerusalem dug up graves in the cemetery belonging to members of the American Colony, a group of devout Christians from the US whom the consul believed were involved in cult-like activities, said Israeli researcher Nirit Shalev-Khalifa. The group's home later became the American Colony Hotel. There has always been a religious fight surrounding cemeteries in Jerusalem, Shalev-Khalifa said. "This is a battle over the celestial Jerusalem," she said. "You can deal with the living, but sometimes it's easier to deal with the dead."