Analysis: Historic reconciliation between Iran and the West will yield significant strategic advantages for Israel

Israel's increasing concerns over the "smile dialogue" between Iran and the West is understandable. Iran has a long history of deceitfulness and violations of agreements, while the West has a long history of capitulating before totalitarian regimes. Therefore, there is a strategic logic to Netanyahu's apocalyptic media campaign. If Iran - as a country on the threshold of nuclear capability - is a threat to world peace, the sanctions imposed on it must not be lifted before its military nuclear program is set at least two years back. The West must not ease the stifling sanctions which threaten the ayatollahs' regime before they agree to relinquish the key elements of the nuclear program or before the West can make certain that Iran is living up to its commitments.

However, it must be acknowledged that Israel has an interest in the success of the negotiations between Iran and the permanent members of the Security Council plus Iran and the signing of a reasonable (if not ideal) agreement on the nuclear program. Not only because it will remove the shadow of Iran's atomic mushroom from the region and the world, but mainly because a historic reconciliation between Iran and the West (and, most importantly, between Iran and the US) will yield significant strategic advantages for Israel.
Nuclear Threat
Iran's strategic landmine
Ron Ben-Yishai
Analysis: If accepted, Tehran's offer to world powers will merely freeze nuclear activity until Khamenei decides to resume it
Iran's strategic landmine
Why? First of all, if Iran regains its appropriate place in the international arena, its citizens will enjoy economic, cultural and scientific advantages, as well as freedom of movement they are denied of today. The Iranian nation is not North Korea. Iran's self image is that of a historic superpower, mainly in the fields of culture and science. Therefore, the Iranians are bothered by the fact that they are not an integral part of the global advancement. To their credit, Rohani and his political patron former president Rafsanjani have been trying for years to improve their relations with the world, and mainly with the US, without giving up on Iran's vital national security interests. The nuclear program, for instance. The main goal in pursuing it is economic, but also social and cultural. In this situation, if reconciliation is achieved, even the conservative ayatollahs, led by Khamenei, will be afraid to take steps that will take Iran's citizens and economy back to the current, dark period. Thus, Iran will resort less and less to subversive tactics and the pace of its military nuclear program will slow down. This is what Israel wants to achieve through diplomacy or, if all else fails, with a military operation. Secondly, because with renewed international legitimacy, Iran and the ayatollahs who are leading it will be much less threatened – militarily and domestically – than in the past. It is these threats that drove them to jumpstart the nuclear program, which was launched by the man they hated so much –the Shah. It must be remembered that Iraqi leader Saddam Hussein attacked Iran immediately after the Islamic Revolution because he knew he had the US' support. Twenty-three years ago Washington automatically backed anyone who acted against the Iranians, who held more than 50 American diplomats hostage. Today the Iranians also feel threatened because they are surrounded by military forces of the US and its allies, including Pakistan, Saudi Arabia and Israel. The nuclear weapons are supposed to guarantee the security of the ayatollahs' regime. They are meant to deter any foreign element (the Americans, or an Arab-Sunni regime, for example) that wants to attack Iran or support a violent coup against the regime, which has lost all political and legal legitimacy in the global arena. 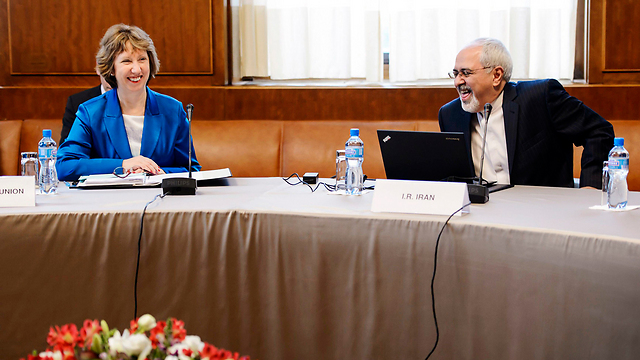 The strategic arsenal of missiles and rockets Iran has equipped Hezbollah with is designated for the same purpose: To deter Israel from attacking the nuclear installations in Iran. Following an agreement on the nuclear issue, and particularly after reconciliation with the US, the threats on Iran's national security will significantly diminish (from the point of view of the regime in Tehran) and allay the fears that fuel the race towards a nuclear bomb and the need to finance Hezbollah and the "Al-Quds Force" – the Revolutionary Guard Corps unit in charge of Iran's global terror network.

No, I am not deluded. The fanatical Shiite regime in Iran still has vital interests which can be advanced through nuclear weapons and terror, such as the desire to export Khomeini's revolution to additional Muslim countries and restore Iran's hegemonic status in the Middle East, mainly in places where there are large Shiite minorities. And we mustn't forget the theological decree to help the (Sunni) Palestinians get rid of the Jewish state, which holds Al-Aqsa and controls what they view as holy Islamic land. In order to advance these goals, Iran is conducting wide-scale subversive and terrorist activities, mainly through agents who are funded, trained and armed by Iran. Iran will not abandon these interests and the lethal means it is activating to advance them following reconciliation with the US, but it is very reasonable to expect that these activities will subside – another benefit for Israel. The ayatollahs, including Khomeini, always gave preference to the survival of the regime and to relieving the hardship of the people over the advancement of the regime's theological and diplomatic interests. Should the US and Iran reconcile, Israel's relations with the Arab world will improve. Saudi Arabia and other Gulf states are currently suffering from acute fear of abandonment. The Saudi royal family, the emir of Kuwait and the rulers of the United Arab Emirates fear they will lose the military and diplomatic American cushion. The US withdrawal from Iraq and Afghanistan, the suspension of military aid to Egypt, the hesitation during the Syrian crisis – all these have led the Arabs to assume that Obama's Washington is no longer capable of being an influential player in the Middle East. This is why the Arab states, including Egypt and Jordan, are seeking alternatives. One option is reaching mutual agreements on economic and military aid between the Gulf states and Egypt, Jordan and other countries. Another option is strengthening relations with Iran. When it comes to its enemies, the Saudi royal family's strategy has traditionally been: "If you can't defeat them or neutralize them, stand by their side and bribe them." There are already signs that this strategy is being implemented with regards to Iran. Senior Arab officials are visiting Tehran, the Saudi king is inviting Rohani to Iran, and so on and so forth. A third option is to get closer to Israel. Netanyahu has hinted twice that there has been contact with "states in the region" and that the process has the potential to advance Arab acceptance of Israel's existence and positively affect the Israeli-Palestinian negotiations. However, for the time being the Arab rulers only see Israel as an attack dog they can sic on Iran's nuclear program. They also believe they can use Israel's (mainly Netanyahu's) connections in Congress to thwart Obama's efforts to improve relations with Rohani and prevent the suspension of aid to Egypt. This is not a recipe for a positive, long-lasting twist in the relations between Israel and the Arabs, but in today's Middle East, one must take every opportunity – not just every threat – seriously, and Israel cannot be too picky.

The conclusion is that Israel should not dismiss out of hand, and certainly not undermine, the warming of relations between the US and Europe and the ayatollahs' regime in Tehran. All we have to do is make certain, mainly through quiet, high-level diplomacy (Obama-Netanyahu) behind the scenes, that the agreement signed with Iran will be reasonable and place Iran at least two years away from obtaining the ability to quickly assemble three or four nuclear warheads. No less, but no more.

The Iranian people, and mainly those who seek reform, must not be led to view us as an eternal enemy; one that even when a solution was near tried to perpetuate their distress by objecting to the removal of sanctions. We must act in such a way that will cause the warming of ties between the US and Iran to gradually lead to improved relations between the Persian and Jewish states. If you will it, it is no dream either.