In the midst of a conflict rife with sectarianism, a giant bronze statue of Jesus has gone up on a Syrian mountain, apparently under cover of a truce among three factions in the country's civil war. Jesus stands, arms outstretched, on the Cherubim mountain, overlooking a route pilgrims took from Constantinople to Jerusalem in ancient times. The statue is 12.3 meters (40 feet) tall and stands on a base that brings its height to 32 meters (105 feet), organizers of the project estimate.

That the statue made it to Syria and went up without incident on Oct. 14 is remarkable. The project took eight years and was set back by the civil war that followed the March 2011 uprising against President Bashar Assad.

The statue in Syria (Photo: AP)
Christians and other minorities are all targets in the conflict, and the statue's safety is by no means guaranteed. It stands among villages where some fighters, linked to al-Qaida, have little sympathy for Christians. So why put up a giant statue of Christ in the midst of such setbacks and so much danger? Because "Jesus would have done it," organizer Samir al-Ghadban quoted a Christian church leader as telling him. The backers' success in overcoming the obstacles shows the complexity of civil war, where sometimes despite the atrocities the warring parties can reach short-term truces.

Al-Ghadban said that the main armed groups in the area -- Syrian government forces, rebels and the local militias of Sednaya, the Christian town near the statue site -- halted fire while organizers set up the statue, without providing further details. 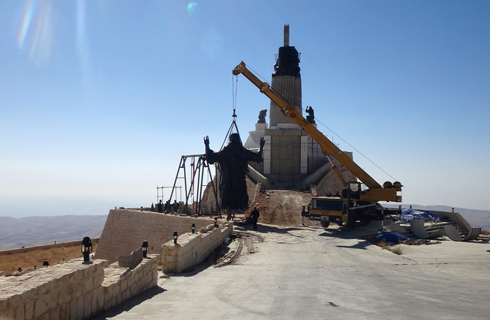 Rebels and government forces occasionally agree to cease-fires to allow the movement of goods. They typically do not admit to having truces because that would tacitly acknowledge their enemies. It took three days to raise the statue. Photos provided by organizers show it being hauled in two pieces by farm tractors, then lifted into place by a crane. Smaller statues of Adam and Eve stand nearby.

The project, called "I Have Come to Save the World," is run by the London-based St. Paul and St. George Foundation, which Al-Ghadban directs. It was previously named the Gavrilov Foundation, after a Russian businessman, Yuri Gavrilov. 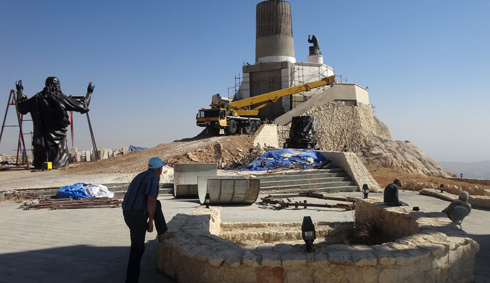 Documents filed with Britain's Charity Commission describe it as supporting "deserving projects in the field of science and animal welfare" in England and Russia, but the commission's accounts show it spent less than 250 pounds ($400) in the last four years. Al-Ghadban said most of the financing came from private donors, but did not supply further details. Russians have been a driving force behind the project -- not surprising given that the Kremlin is embattled Assad's chief ally, and the Orthodox churches in Russia and Syria have close ties. Al-Ghadban, who spoke to The Associated Press from Moscow, is Syrian-Russian and lives in both countries. Al-Ghadban said he began the project in 2005, hoping the statue would be an inspiration for Syria's Christians. He said he was inspired by Rio de Janeiro's towering Christ the Redeemer statue. He commissioned an Armenian sculptor, but progress was slow. A series of his backers died, including Valentin Varennikov, a general who participated in the 1991 coup attempt against then President Mikhail Gorbachev. He later sought President Vladimir Putin's backing for the statue project. Varennikov died in 2009. Another backer, Patriarch Ignatius IV, the Lebanon-based head of the Greek Orthodox Church of Antioch and All the East, died in 2012. He had donated the land for the statue, according to church official Bishop Ghattas Hazim. By 2012, the statue was ready, but Syria was aflame, causing the project's biggest delay, al-Ghadban said. Majority Sunni Muslims dominate the revolt, and jihadists make up some of the strongest fighting groups. Other Muslim groups along with the 10-percent Christian minority have stood largely with Assad's government, or remained neutral, sometimes arming themselves to keep hard-line rebels out of their communities. Churches have been vandalized, priests abducted. Last month the extremists overran Maaloula, a Christian-majority town so old that some of its people still speak a language from Jesus' time. On Tuesday a militant Muslim cleric, Sheik Omar al-Gharba, posted a YouTube video of himself smashing a blue-and-white statue of the Virgin Mary. Al-Ghadban and the project's most important backer, Gavrilov, weighed canceling it. They consulted Syria's Greek Orthodox Patriarch John Yaziji. It was he who told them "Jesus would have done it." They began shipping the statue from Armenia to Lebanon. In August, while it was en route, Gavrilov, 49, suffered a fatal heart attack, al-Ghadban said. Eventually the statue reached Syria.

"It was a miracle," al-Ghadban said. "Nobody who participated in this expected this to succeed."