Morsi to judge: I am your legitimate president

Egypt's ousted president's trial adjourns within minutes after opening Monday morning, after Morsi refuses to wear prison uniform, shouts to judge from defendants stand 'I am the legitimate president, judge – you are wrong!' Egyptians on alert of riots

An Egyptian court on Monday adjourned until January 8 the trial of ousted President Mohamed Morsi and 14 Muslim Brotherhood officials over alleged involvement in the death of protesters during his year in power.

The trial was shortly adjourned earlier Monday due to Morsi's refusal to put on his prison uniform – as well as interjections made by the other defendants against the courtroom and the government, which caused a small riot to breakout within the courthouse – but was renewed around noon.

Morsi and the additional defendants will be moved to Cairo's notorious Tora prison after their court session, a security source said. 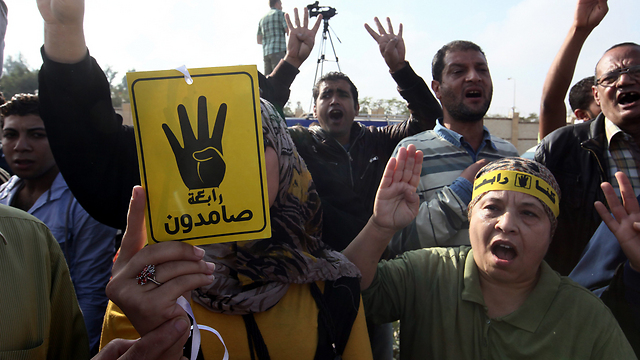 According to Al-Arabiya network, during the morning session of the trial, Morsi turned to the judge and said: "I am your legitimate president. You are wrong." He added: "I object to having the Egyptian courthouse cover for the criminal military coup."

When the courtroom took attendance of the defendants, Morsi responded: "I am forced to be in this place. I am here by force." He demanded of the court's president to not take part in the revolt and authorize the exercise of his power as president.

The officials say Morsi's comments came in response to a judge calling his name out after identifying him as a "defendant." 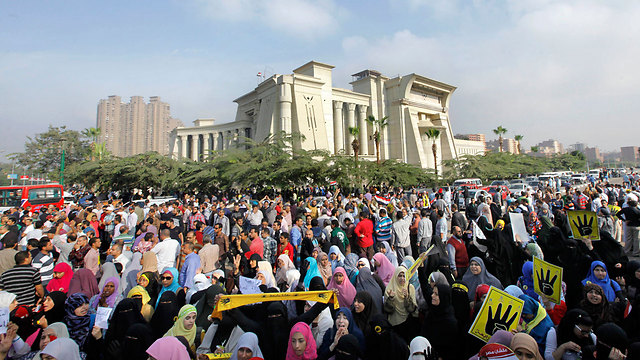 Morsi replied: "I am Dr. Mohammed Morsi, the president of the republic. I am Egypt's legitimate president." He added: "I refuse to be tried by this court."

Two of his co-defendants, senior Muslim Brotherhood leaders Essam al-Erian and Mohammed al-Beltagui, chanted "Down with military rule" at the start of the hearing, and applauded Morsi when he walked in.

Egypt's state TV said the judge had adjourned the hearing soon after it started because the defendants' chants were disrupting the proceedings. The adjournment came after a two-hour delay in the start of the proceedings.

Security officials inside the courtroom said the delay was caused by Mohamed Morsi's insistence not to change into the prison uniform customarily worn by defendants, part of his refusal to recognize the trial's legitimacy. The officials spoke on condition of anonymity because they were not authorized to speak to the media.

The trial is not being aired on state television and journalists were barred from bringing their telephones into the courtroom set up in a Cairo police academy.

Hundreds of Morsi supporters gathered outside the building to pledge their support for him. One sign read "The will of the people has been raped", a reference to the army takeover.

Clashes broke out in Alexandria between hundreds of Muslim Brotherhood supporters and residents of the area. During the clashes gunshots were heard and police forces started operating in the area.

Morsi and the others are charged with inciting murder and could face the death penalty if convicted.