After a deal between Iran and the world powers seemed on the cusp on Friday, now the winds are turning. First, the Los Angeles Times reported the deal hit an unexpected roadblock, which may lead to talks spilling over to next week, now French Foreign Minister Laurent Fabius said there is no certainty an agreement will be reached with Iran.

"As I speak to you, I cannot say there is any certainty that we can conclude" the talks, French Foreign Minister Laurent Fabius said on France Inter radio, noting that France could not accept a "sucker's deal".

Among the sticking points for Paris, Fabius said that France wanted Iran to stop operations at its Arak reactor during the negotiations and said there were questions about Iran's stock of uranium enriched to 20%. 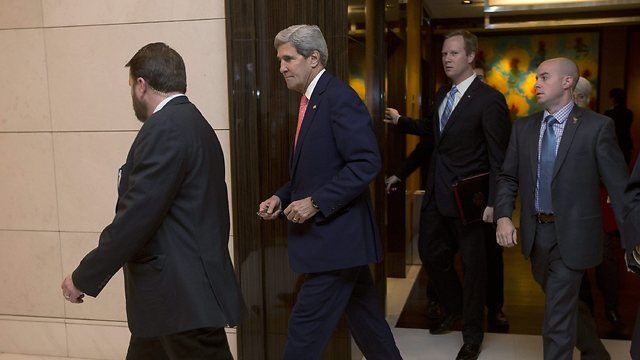 He added that he concerns of Israel, other countries in region over Iran must be taken seriously into consideration.

Britain also said on Saturday important issues remain to be resolved at negotiations on Iran's nuclear program and there was no certainty that a deal could be reached during this round of talks despite "very good progress" so far.

"These negotiations have made very good progress and continue to make good progress. But there are still important issues to resolve, so clearly they are not over yet," Foreign Secretary William Hague told reporters during a break in the talks. "It's too early to say that we will reach a successful conclusion today," he said.

Earlier, senior diplomats involved in the negotiations told the Los Angeles Times that the talks will most likely spill over to next week, after negotiations hit unexpected snags.

Though they declined to say why the deal has stalled, but the two sides are known to disagree about Iran's construction of a plutonium reactor at Arak, a possible route to a nuclear bomb.

The international community wants Iran to agree not to activate the reactor while the interim deal is in place. But they also may be pressing for more restrictions. 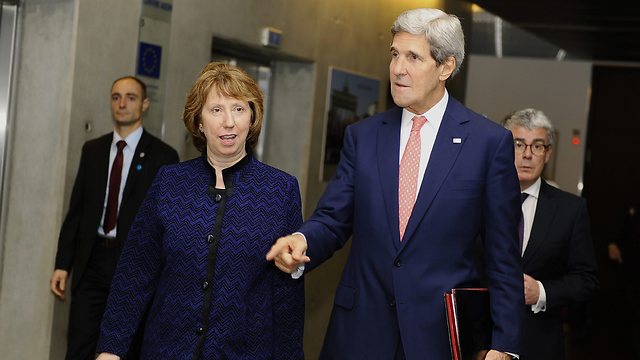 On Saturday morning they will be joined by Russian Foreign Minister Sergey Lavrov and the Chinese deputy foreign minister.

On Friday, Kerry, Ashton and Zarif held a five-hour-meeting, which failed to culminate in a deal.

The British Telegraph reported America has proposed a short-term nuclear agreement with Iran at a meeting in Geneva which would allow Tehran to continue enriching uranium at low levels, according to an aide briefed on the talks.

According to the report, the goal is to freeze Iran’s nuclear program for perhaps six months in order to create a breathing space for a comprehensive agreement to be negotiated.

According to the aide, the deal included four key points: A halt to 20% uranium enrichment, allowing Iran to enrich up to 3.5%, an agreement not to activate the Arak plutonium reactor, and no use of advanced centrifuges.

In return, the US would ease economic sanctions, possibly by releasing some Iranian foreign exchange reserves currently held in frozen accounts. In addition, some restrictions affecting Iran’s petrochemical, motor and precious metals industries could be relaxed.