French president to arrive on Sunday amid renewed talks to resolve Iranian nuclear issue. PM Netanyahu tells Le Figaro 'the French president is close friend of State of Israel, I look forward to hosting him'

French President Francois Hollande is set for a red carpet welcome when he visits Israel and the Palestinian Territories this weekend amid renewed efforts by the West to curb Iran's contested nuclear program.

Israeli Prime Minister Benjamin Netanyahu has said he is "impatient" to meet Hollande, who arrives on Sunday in the midst of negotiations to resolve the impasse over the nuclear issue.

"The French president is a close friend of the state of Israel and I look forward to hosting him... at a time when the major powers, including France, are discussing ways to halt the Iranian nuclear program," Netanyahu said.

In an interview with Le Figaro newspaper published on Saturday Netanyahu added: "We hope France will not yield." 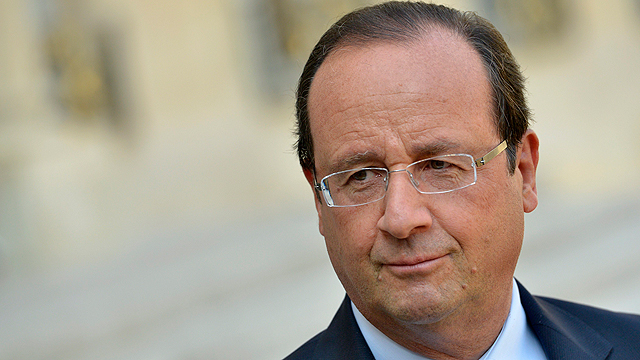 "For us, the United States remains an important ally, the most important ally. But our relationship with France is also very special," he said.

"On the Iran issue, our countries have defended common stances for years, regardless of the party in power, and we are maintaining this vital partnership with President Hollande," he said.

"We welcome his coherent and resolute stance on the Iranian issue."

Israel and world powers suspect the Islamic republic's program of uranium enrichment to be a covert drive to acquire a nuclear weapons capability, an allegation vehemently denied by Tehran.

French Foreign Minister Laurent Fabius, a major participant at grueling talks on finding a deal to the Iranian nuclear impasse which ended in deadlock last weekend, is accompanying Hollande.

Western diplomatic sources say the two sides were close to a deal in Geneva but Iran backed off because it was unhappy with some of the wording in the text.

Some reports say this was due to reservations expressed by France which were subsequently adopted by other powers. The talks will resume in Geneva next week.

The P5+1 negotiating with Tehran is made up of the five permanent members of the UN Security Council -- Britain, China, France, Russia and the United States -- plus Germany.

Yes to civil nuclear energy, no to atomic bomb

A highly placed French source said that Paris's objective was "not to please this country or that but based on a clear principle, civilian nuclear energy, yes; atomic bomb, no."

Apart from Iran, the other main issues during the trip are the stalled Middle East peace process and stronger trade ties with Israel.

Hollande, whose delegation includes business leaders including the heads of firms such as Alstom, Arianespace and Vinci, wants to boost the level of bilateral trade, which stood at 2.3 billion euros ($3 billion) in 2011.

"Israel is a rich country and at the cutting edge of innovation but our trade is mediocre," said a French official, speaking on condition of anonymity.

The French leader, apart from holding talks with Netanyahu and President Shimon Peres, will also go to Ramallah for discussions with Palestinian Authority president Mahmud Abbas.

French sources said he would encourage both sides to make the necessary compromises and efforts to overcome the obstacles to peace talks.

Hollande will make a series of highly symbolic gestures during his trip, where he will place a wreath at the grave of Theodor Herzl, the founder of modern political Zionism, and place a stone at the grave of slain prime minister Yitzhak Rabin and his wife Leah.

On Monday, Hollande will meet French priests in the Church of Saint Anne in Jerusalem's Old City, a building which the Ottomans donated to France in 1856.

He will also visit the grave of Palestinian leader Yasser Arafat, who died in 2004 in France in a hospital and whose remains were recently examined for traces of poisoning.

On Tuesday, Hollande will visit the graves of four of the victims of Al-Qaeda-linked gunman Mohamed Merah who went on a shooting spree in and around the southern French city of Toulouse in March 2012, killing seven people.

Netanyahu enjoyed close ties with Hollande's right-wing predecessor Nicolas Sarkozy until a G20 summit in November 2011 when Sarkozy branded the Israeli leader "a liar" in a private conversation with US President Barack Obama.

But Hollande in private remarks criticized Netanyahu for transforming a memorial service last year for Jews slain by Merah into a campaign meeting ahead of this January's legislative polls.