The prime minister, defense minister and IDF chief of staff greeted the IDF rescue delegation to the Philippines that returned to Israel Wednesday afternoon.

During the 12 days the Israel FIRST (Fast Israeli Rescue and Saving Teams) operated in the disaster-struck region, the 148 delegation members established a field hospital and treated some 2,800 patients, including 900 children. The team also assisted local forces in reconstructing public buildings and facilitated the restoration of running water.

Prime Minister Benjamin Netanyahu welcomed the troops, saying "Welcome home, you have represented Israel with honor in a serious mission. 66 babies were born in your field hospital, the first of which is aptly named 'Israel' – that is the essences of this delegation. IDF can undertake an array of missions, God willing these will be the types of mission you will be called to do. I hope there will be fewer disasters, but it is comforting to know that you are in charge of such operations." 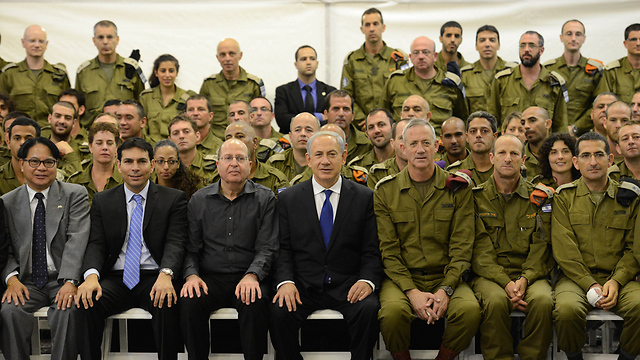 Referencing a song by the recently deceased Israeli singer and culture icon Arik Einstien, IDF Chief of Staff Brig.-Gen. Benny Gantz said "for you (Einstein's song) 'Me and you will change the world' is not just a verse from a song, but your ability to reach any point in the world. Even after you left the scene, your flame continues to burn and spread light and influence over those you aided."

Gantz further said that "the IDF is ready for the hour it will be called, whether it is a local operation or a helping hand. Our alertness and training promise that we'll know how to act when the time comes, responding to any military or civilian incident."

Also at the ceremony was the Philippines' Ambassador to Israel Generoso D.G, Calgone who told the soldiers that every minute they spent in the typhoon struck islands were dedicated to returning life to normal, a mission which was undertaken with great determination, proving the soldiers were dedicated to the Jewish tradition of Tikun Olam.

He concluded his warm words by thanking the soldiers in Hebrew: "Toda Raba" he concluded.

Sefi Mandelovich, 35, a pediatrician at the Shaare Zedek Medical Center in Jerusalem and member of the delegation, said: "We arrived at an area with a lot of destruction, children holding signs reading 'We need eater and food', and we were highly motivated to help them. As a father of three it was just emotional, and I made sure to be in touch with my family."

Mandelovich told of a touching moment he encountered while on mission. "The case that touched me the most was the one of a premature baby left without care, weighing 1.5 kilograms (3 pounds). We resuscitated him and because of the lack in means the treatment was entirely improvised in terms of tools and medicine. After 30 hours of treatment we transferred him to a larger hospital, built an incubator out of Styrofoam and created a heating mechanism with chemicals used to heat food up. The respirator was operated with a generator, which was set up on car. Gladly, before heading home on Tuesday, we visited him and by now he should be breathing on his own."

Assaf Diller of the Home Front Command said: "We dealt mainly with assistance to citizens, rebuilt the schools that were ruined, and our delight was to return there after a couple of days and see students sitting in the classrooms. Our conditions were minimal, with food we brought from Israel and makeshift showers, but what kept us going was the will and desire to help."