My sea, my day

Op-ed: With most of Gazans' human needs unfulfilled, there's nothing worse than losing hope

It's 5:30 am. This is around the time I usually wake up. I live near the beach, on the 10th floor. The only exercise women can do outdoors in Gaza is walking. Many women are denied even this, for different reasons. I like to walk. It's one of the best ways to heal the spirit, aside from music, reading and writing.

There's no electricity, so the elevator doesn't work. And so I walk down the stairs, all ten floors, without any trouble, into the street, where a pleasant morning breeze is waiting. When I go back to my building, there's still no electricity. Dilemma: I could walk up the stairs, or wait in the lobby for half an hour. The doorman turns the generator on every half hour. I decide to wait. Is it okay to complain about such a stupid little thing when most of my human needs – water, electricity, routine supply of proper food, benzene, the right to travel, the right to health – aren't properly fulfilled?

Back in the apartment, there's no hot water, not even for a quick shower. My boiler is electric. No chance of doing laundry today either. Like the rest of the Strip, my house gets electricity only 12 hours a day. It obviously affects how I plan my time: when I get up, when I send e-mails or make calls, when I leave the house and go back, when I cook or do laundry.

The work day ahead started at a-Nuseirat Refugee Camp, where I oversee the Maia Project, one of the projects run by the Middle East Children's Alliance (MECA) in Gaza. A few years ago, MECA launched a campaign designed to supply school children with clean water, by installing water purification units in UNRWA schools and in some day cares. Ninety percent of the water in Gaza is not potable, because of high salt levels and contamination caused by the sewage system, which is faulty in some areas. 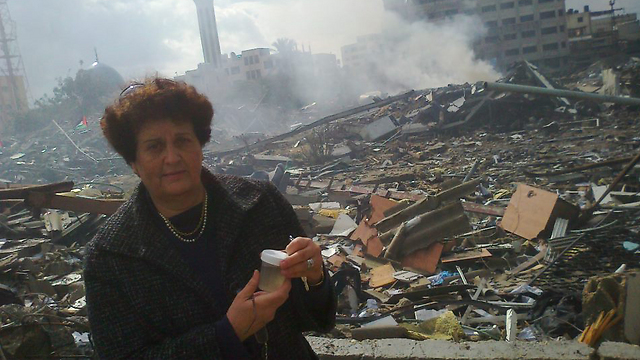 Muna al-Fara at a-Nuseirat refugee camp after Operation Pillar of Defense (photo courtesy of Gisha)
I was going to stop at the gas station, but there was a long line-up of cars, so I took the chance that the gas in my tank would be enough for 15 kilometers. There was very little traffic on the way. There were more cars lined up at gas stations. I mostly saw dozens of people waiting for public transportation. The gas shortage, which is mainly caused by the destruction of the tunnels on the southern border, has managed to overshadow the ongoing daily suffering in Gaza. The alternative for Egyptian fuel is fuel that is brought in from Israel, but it's too expensive for most Gaza residents. The result is that teachers can't get to school in time; students and lecturers to universities; doctors, nurses and patients to hospitals. Gaza's major hospital, al-Shifa, has a gas shortage and so the priorities have shifted. Gas, like electricity, is used for essential treatments for patients at risk, everything else is second place. In terms of budget, things like general cleaning at the hospital, adding beds, etc., get put off.

No solution on horizon

As part of my work with the Red Crescent, I know that there are departments that the hospitals have to keep connected to electricity at all times, like the neo-natal unit for example, which has a constant, stable, electricity supply. It comes from a generator every time the daily blackout rolls around. But, that brief moment of transition between regular supply and generator supply may have a huge impact on the development of the babies in the ward. I returned home at around 1 pm. Still no electricity. This time, I didn't wait for the elevator by myself. There were a lot of children who live in the building. I had a nice opportunity to talk, joke around and try to lift their spirits. At home, I had a meeting with a colleague who had just gotten back from Rafah Crossing. He told me what was going on there. He had been trying to get out of Gaza for four days, to go to Sweden, where he studies. He's stressed. Thousands are trying to get out of Gaza: medical patients, students, professionals working abroad and just travellers. Only a few managed to get through, maybe 70 crossed today. When I think about medical patients who need further treatment that they can't get in Gaza, some of them at risk of dying while they wait, I feel how my own humanity is overpowered by the daily struggle of living under the closure. The Ministry of Health has already announced that pharmacies, both private and governmental, have run out of many drugs. This is how I live, day in, day out, in Gaza. Most of the population is less privileged than I am. When poverty wins out and there is no work and no solution on the horizon, there's nothing worse than losing hope. Dr. Muna al-Fara is a Middle East Children's Alliance project manager and activist in Gaza