Rabbi Lau: Do not merge dual chief rabbi position into one

Chief Rabbi David Lau launched a verbal attack against a bill which aims to merge the dual position of chief rabbi. The bill, currently making preliminary rounds in the Knesset wants Israel to have only one chief rabbi, instead of an Ashkenazi one and a Sephardic one. "Israel should have two religious chief rabbis. One in charge of legal aspects and the other over the rabbinical councils and implementing decisions," the Chief Rabbinate's Rabbinical Council wrote in a statement.

The group also attempted to support the claim in favor of the dual position by claiming that "unlike the leaders of other public systems, chief rabbis do not have deputies." 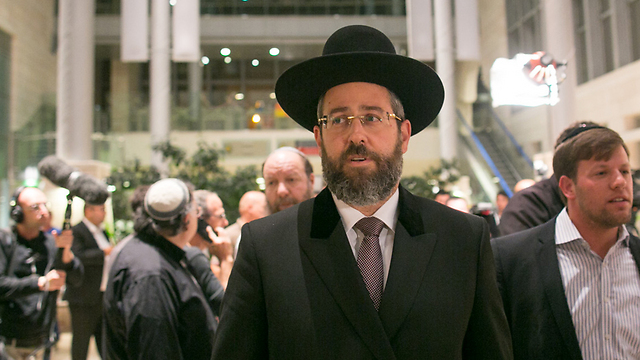 Chief Rabbi David Lau (Photo: Ohad Zwigenberg)
The council's president, Ashkenazi Chief Rabbi David Lau, claimed that the difference between the two rabbis cannot be reduced to the differences between the two Jewish traditions, but rather to two different positions. "In order to properly run Israel's religious services, it is necessary that at the head of these two systems (the court and the council) will stand two rabbis of an equal standing, like in the times of the Tannaim Abtalion and Shmaya." Rabbi Lau further added that "the workload for the chief rabbis is heavy already. There is no justification for such a move, which will just harm the rabbinate's ability to deliver religious services."

The Ministerial Committee for Legislation has already approved a bill presented by MKs Moshe Feiglin (Likud), Rabbi Dov Lipman (Yesh Atid) and Aliza Lavie (Yesh Atid), which would unite the two chief rabbi positions into one.

'One rabbi for one nation'

The bill's initiators said that the proposal “carries a message of unity, and of ending the Diaspora existence, which involves separation. We hope that the decision will influence the next generation of rabbis, who will attempt to be meaningful for everyone in Israel.”

Some weeks ago, Justice Minister Tzipi Livni and Religious Affairs Minister Naftali Bennett announced their plan to introduce a similar bill soon, meant to end racial tension and separation in Israel. "Israel has one prime minister, one president, one Supreme Court president, and one IDF Chief of Staff – it is time for one rabbi for one nation," said Livni, "It is time for Israel to have one chief rabbi that will unite all the separate segments of Israeli society, a Rabbinate that will provide services to all ethnicities of Israel instead of a country that preserves official – and antiquated – separation of ethnicities. It is possible to respect the traditions of each and every one of us without separating religious authorities."

Bennett added, "This is an important step that symbolizes the unity of the nation. Appointing one chief rabbi is one of the matters in which the only question is why it hasn't happened before.