On charisma and humanity

When I entered his office, he stood there in all his height and glory, and in his third or fourth sentence he asked me, "Honorable ambassador, have you met my boss yet?" When he understood that I didn't know who the boss was, he rushed to explain: "I mean Lazar Sidelsky, the lawyer who dared give me, a black intern, a job in the 1950s. He is the only boss I've ever had, a good Jew who would be very happy if the ambassador of Israel paid him a visit." Only afterwards we got down to business, and there was of course a lot to talk about. 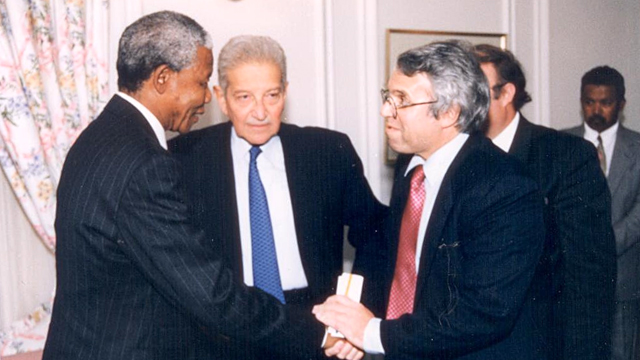 Liel with Mandela and former President Ezer Weizman
Although he was already a legend since his days in prison, Mandela was and remained a man of people, a man of human warmth, a leader who sees and understands the world through human beings. He leaned first and foremost on the love flowing from him and back to him. People were simply magnetized to him. I would suggest the name "Mandela" as the finest synonym for "charisma." Charisma not through a teleprompter, charisma of direct touch, of a smile, of a good word, and only later of eloquence, leadership and resolution, which he also had plenty of. 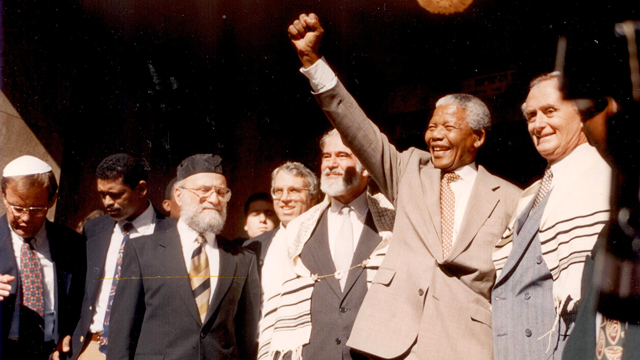 Now that he is gone, I must choose from the dozens of personal experiences with him the one that characterizes him the most, and this is my choice: In October 1993, all ambassadors were invited to an event marking the 100th anniversary of Mahatma Gandhi's arrival in South Africa. Mandela was the keynote speaker. When I approached the place, one of his assistants said to me, "Madiba (Mandela's clan name) would like to talk to you."

I entered the small room where he was learning his speech. He stood up to greet me and with an earnest expression told me excitedly, "This morning I was informed from Stockholm that De Klerk and I have won the Nobel Peace Prize for this year. I ask you, honorable ambassador, to send a telegram to Jerusalem and let your prime minister know that he is the one who deserves this prize, not me."

I was speechless. Besides the nobleness on the personal level, I suddenly realized just how affected Mandela was by the handshake between Rabin and Arafat. He clearly saw Israeli-Palestinian peace as a mission of the same magnitude of his life's challenge: Turning South Africa into a democratic country.

Even after 27 unbearable years in prison, Mandela remained a man of peace, a man of compromises, a man of forgiveness. He always saw the best in people and believed that every person could be persuaded.

In the past few years, as we saw Middle East leaders abusing their citizens, I thought to myself more than once that they could use some private lessons from Nelson Mandela, precisely at a time when these lessons could no longer be delivered.