'Mohammed is a pig' sprayed on Baqa al-Gharbiyye mosque

The words "Mohammed is a pig", "Mutual responsibility" and "Terror stones" were spray-painted on a Baqa al-Gharbiyye mosque and were discovered Sunday morning. The windshields of five cars were also broken. Hundreds of local residents arrived at the scene and demanded the police work to bring the perpetrators to justice. Police said they have begun investigating the incident. Damage was sustained to the mosque.

Ahmed Maswara, a Baqa al-Gharbiyye youth, told Ynet that "I was on my way to work and the moment I heard I went to the scene. We are very angry at the police that don't do anything to stop this type of behavior." 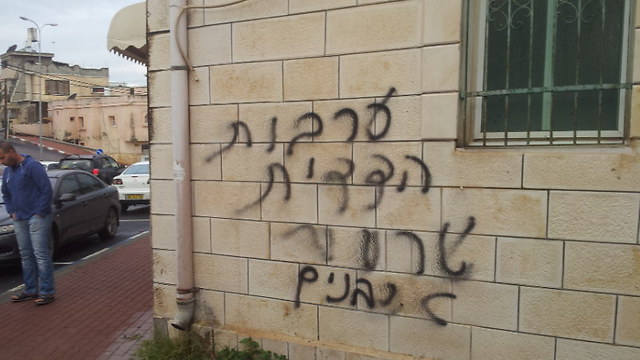 "Me and other local youths will get together later today to decide if we want to organize a demonstration against this act of terror – because those perpetrating such acts are terrorists. Unfortunately they get a green light to continue harming us," Maswara said. 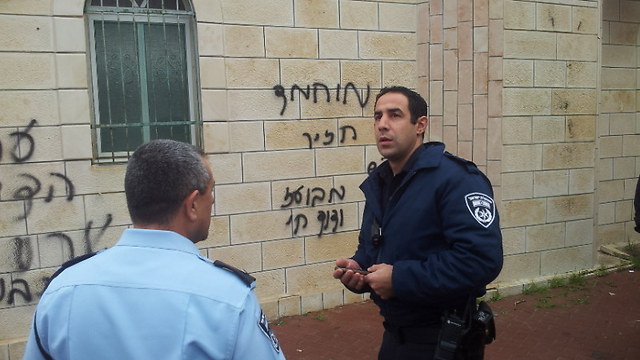 Sheikh Kiri Achsander, the mosque's imam, said Sunday that "after Fajr (dawn) prayers we exited the mosque and found the graffiti on the wall. These types of incidents keep happening again and again, this time it happened in Baqa. Unfortunately, the government still does not take proper care of such incidents, thus encouraging racists to continue actions, which damage the sanctity of holy places and the Prophet Mohammed."

The sheikh spoke about worshipers' reactions to the 'price-tag' attack: "There is anger, After the incident lots of people arrived at the mosque and expressed rage at the act and demanded that it not be ignored. We want to send a message to those doing the graffiti that they are villains and we refuse to get upset by their actions. "The goal of such attacks is to make life difficult for us. But we are here to say they will not darken our days, we are here and we will continue to be here. Such graffiti will not deter us. Arabs and Muslims are united in their zero tolerance to this kind of nonsense." The head of Baqa al-Gharbiyye's council, Samih Abu-Mouch, said "the council will convene an urgent meeting to decide our next steps. Those who spray painted these hateful words think we will leave our lands, but they are wrong, these attacks reinforce us."

The police said they have begun investigating but no culprits have yet been apprehended.

Meanwhile, the Arab community's parents' council has decided to hold a strike across all the town's educational facilities Monday.

The local council as well as the Islamic Movement have also decided to hold demonstration Sunday evening expected to be attended by hungers of Arab citizens. (Hassan Shaalan)