Modern 'Hitler salute' gaining momentum among anti-Semites, who pose for pictures in sensitive sites worldwide and in Israel, including alongside IDF soldiers who are unaware of gesture's meaning

VIDEO - The right hand and its fingers are stretched downwards along the body, while the left hand performs a "salute" movement on the opposite arm. Sound like an aerobic exercise for beginners? According to anti-Semitism researchers, it is actually a clear anti-Semitic symbol, a modern Nazi salute, spreading among Jew haters across Europe.

In recent months, the researchers warn, anti-Semites have been taking advantage of the lack of public awareness of the new "salute" and taking pictures of themselves performing the salute in particularly symbolic and sensitive places around the world like the Treblinka extermination camp,

the Western Wall plaza and next to IDF soldiers, as well as alongside Jews who are unaware of the "trick." They then post the photos on the Internet.

The phenomenon was revealed in a conference held earlier this week in New York by the World Zionist Organization's Department for Countering Anti-Semitism, in the presence of senior officials involved in researching and countering anti-Semitism in Israel and the United States.

'It's reaching Israel and must be stopped'

In order to expose the public to the new movement, which many have encountered but were unaware of its meaning, the conference organizers presented pictures and videos of neo-Nazis documenting themselves performing it in different places around the world.

As part of a more concrete effort, the Defense Ministry has been asked to warn IDF soldiers against the phenomenon in a bid to prevent them from unknowingly participating in further embarrassing photographs. 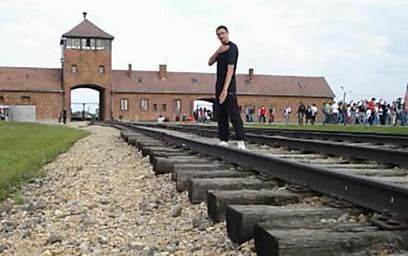 The new salute, based on a reverse Nazi symbol, was created by a French comedian called Dieudonné, who is known for his anti-Semitic acts and statements and has even been convicted by courts in France several times in the past. The physical gesture, which he dubbed "quenelle," has spread in the country, but the government has yet to define it as illegal. 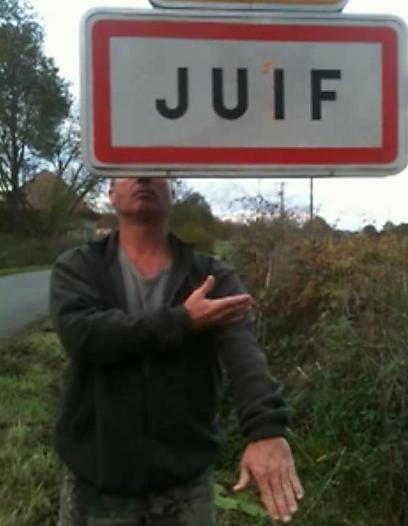 Different sources have been arguing whether it is seen as anti-Semitic gesture in all cases. There are those who say that some of those photographed doing the "quenelle" gesture are doing it for "anti-establishment" motives which are not necessarily anti-Semitic. Among anti-Semites, however, as the WZO indicates, it is a common anti-Semitic gesture, and media outlets have even been apologizing for mistakenly exposing it.

Yaakov Haguel, head of the WZO's Department for Countering Anti-Semitism and the conference's organizer, told Ynet that the department's Red Email received initial pictures of the new salute several months ago, but "we didn't understand what it was about."

They later realized the meaning of the gesture and were then exposed to cases in which neo-Nazis performed it in Jewish holy sites in Israel and around the world. 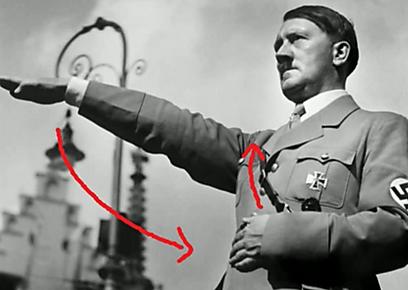 Sources fighting phenomenon say this is its origin

"It's gaining more and more momentum, spreading on the Internet and social networks and turning into a clear Nazi symbol, and it doesn't appear to be a passing phenomenon," says Haguel. "It's spreading to Israel too these days, and we must acknowledge that and stop it."

Eitan Behar, director of the Center for Diaspora Communications and Countering Anti-Semitism at the WZO, told Ynet that the phenomenon he defined as "extremely troubling was gaining momentum in recent weeks.

"Saluting with raised hands is banned in the European Union, and people even get arrested for it, so the neo-Nazi activists perform the same gesture in a different angle," he noted.

A special Facebook page is updated very frequently, particularly with photos from around the world documenting the new salute in places with religious and national significance to Jews. It has accumulated tens of thousands of regular followers, and almost 100% of them are active – through "likes," shares and comments. A special website has also been launched for the same purpose. 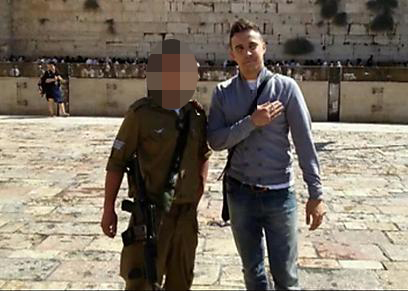 In the center led by Behar, volunteers from all over the world monitor anti-Semitic incidents in the media, Internet and social networks. As an expert on the issue, he asserts that the new phenomenon is significant and linked to hatred of Jews.

"It has some general anti-establishment aspects, and the person who invented it is a comedian, but one cannot escape its main message as a new, unhumorous Nazi symbol," he said. 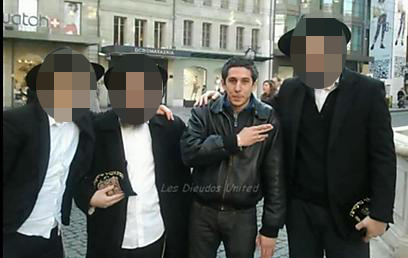 Performing gesture while taking advantage of many people's innocence

The "saluters" take advantage of many people's innocence and ask them to perform the gesture as they take a picture of them – including IDF soldiers and Holocaust survivors.

The sites where they choose to do so leave no room for doubt: The Anne Frank House, synagogues and Jewish cemeteries, the Western Wall plaza, against the backdrop of German and Israeli flags, on streets with "Jewish" names. They have also posted processed photos of famous characters, like Superman and Santa Claus, performing the salute.

The Countering Anti-Semitism and Delegitimization of Israel Conference is held every two years in a different country. This year it took place in the United States, following the rise in the number of anti-Semitic events recorded in New York, Louisiana, Long Island, Miami Beach and Michigan, which include violent assaults, vandalism, harassment and threats against Jews.

The conference was initiated by the Department for Countering Anti-Semitism of the WZO in collaboration with the American Zionist Movement and the Israeli Consulate in New York. It was attended by Deputy Defense Minister Danny Danon, US Special Envoy to Monitor and Combat Anti-Semitism Ira Forman, former Harvard Professor Daniel Jonah Goldhagen, who wrote "The Devil That Never Dies: The Rise and Threat of Global Anti-Semitism," and others. 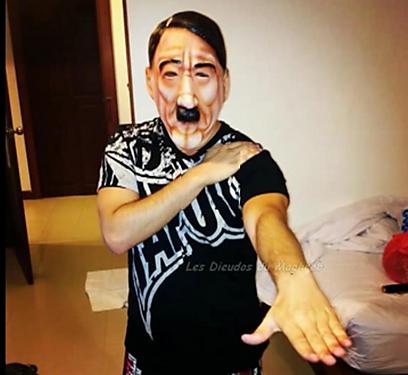 The issues discussed during the conference included "anti-Semitism in Zionist ideology," anti-Semitic expressions in arts and culture, the role of the US in fighting global anti-Semitism and the war on anti-Semitism on the Internet and social networks.

The organizers presented hate crimes from recent months, including an attack on Jewish school students in Pine Bush, New York, anti-Semitic statements by an American rap singer in a radio station interview, and more.

'Alarming trend of hatred of Jews'

Yaakov Haguel said during the conference that "anti-Semitism is a sore evil. We must fight it in any way possible. The hypocrisy of countries in the world must end. It's time to join forces, Jews and non-Jews, governments and organizations, and put an end to rising anti-Semitism.

"The recent anti-Semitic incidents point to an alarming trend of hatred of Jews around the world and particularly in the US, which is considered by many the safest place for Jews. Unfortunately, we are witnessing dozens of anti-Semitic incidents on average within one week across the US. "It's as simple as this: If we put our heads down – we'll get hit in the head. I call on leaders of the Jewish communities in the US, of all streams, on heads of the Jewish student organizations in the US and the world, to join forces with us in this important struggle. We have no other people, we have no other past, and we have a shared future. We must put an end to anti-Semitism." Deputy Defense Minister Danon said, "The anti-Semites of the new era attack Israel incessantly. They are not shocked by the horrors in Syria and are not crying out, but when the State of Israel defends its citizens against merciless terrorists and missiles launched on school, they cry out that it's a 'massacre.' They are characterized by indifference, hypocrisy and racism. They must be renounced by every modern society."

The Orot channel contributed to this report